his life, writings, and adventures 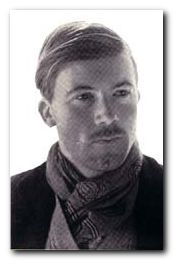 Gerald Brenan (1894-1987) was born in Malta, the son of an English army officer. After spending some of his childhood in South Africa and India, he grew up in an isolated Cotswold village. He studied at Radley College and then the military academy at Sandhurst. Travel and adventure were to be his way of life, and at sixteen he ran away from home. His aim was to reach Central Asia but the outbreak of the Balkan War and shortage of money caused him to return to England. He studied to enter the Indian Police (as did his near-contemporary George Orwell) but on the outbreak of the First World War, he joined the army. He spent over two years on the Western Front, reaching the rank of captain and winning a Military Cross and a Croix de Guerre.

Following the end of the war, his fellow officer and friend Ralph Partridge introduced him to the fabled Bloomsbury Group. It was through Partridge that Brenan met Lytton Strachey, Dora Carrington, and Virginia Woolf. As soon as he was released from military service he packed a rucksack and left England aboard a ship bound for Spain. He was disillusioned with the way of life in England and with the stifling social and sexual hypocrisies of British bourgeois society. He rebelled against becoming part of it and, being a romantic and adventurer, resolved to seek a more breathable atmosphere in which to live.

He also wanted to educate himself and become a writer. As he records in his best known travel memoir, South from Granada, he felt ashamed that his public school upbringing had left him with a very poor education. He shipped 2,000 books out to his chosen destination – an area deep in Andalucia known as ‘La Alpujarra’.

South from Granada is a classic in which Brenan describes setting up home in a remote Spanish village in the 1920s. He has a marvellous grasp of geography; he captures the rugged atmosphere of the region; and he has a particularly detailed knowledge of botany. Local characters and customs are vividly recounted. Bloomsbury enthusiasts will be delighted his by hilarious accounts of visits made by Lytton Strachey and Virginia Woolf under very difficult conditions, as well as a meeting with Roger Fry in Almeria.

Ralph Partridge and Dora Carrington, recently married, also visited him with Lytton Strachey in 1920, and Carrington’s fondness for Brenan is thought to have started on this trip. She carried on an extensive correspondence with Brenan for the next several years and in 1922 they had a brief affair, which was rapidly discovered by Partridge. There was a year of silence between the three, before reconciliation took place and the often-stormy friendship continued for the remainder of their lives.

In 1930 he married the American poetess Gamel Woolsey. In 1934 the Brenans left Spain and were unable to return until 1953, partly because of the Spanish civil war. During the Second World War he was an Air Raid Warden and a Home Guard. They spent this time in Aldbourne and Brenan expressed his feelings of exile from Spain by completing three major works on Spanish life and literature. On his return to Spain he began a series of autobiographical works, including South from Granada, A Life of One’s Own, and A Personal Record.

The Spanish Labyrinth has become the classic account of the background to the Spanish Civil War. It has all the vividness of Brenan’s personal experiences and intelligent insights. He tries to see the issues in Spanish politics objectively, whilst bearing witness to the deep involvement which is the only possible source of much of this richly detailed account. As a literary figure on the fringe of the Bloomsbury Group, Gerald Brenan lends to this narrative an engaging personal style that has become familiar to many thousands of readers over the decades since it was first published

After the death of his wife in 1968, a young English student of the poetry of the Spanish saint – St. John of the Cross – joined Gerald as his secretary and companion. This young lady Lynda Jane Nicholson Price remained with him for 14 years. In the later part of his life he was confined to an old people’s home in Aldermaston, but a group of his Spanish friends ‘kidnapped’ him and took him back to what they regarded as his spiritual home, just outside Malaga. He died on January 19, 1987 while in the hands of the Spanish Medical Services who had undertaken to care for him. He was acclaimed for his services to Spanish literature, buried in Malaga, and a plaque dedicated to his work was fixed to the house where he had lived in Yegen. It reads:

“In this house for a period of seven years [1920-1934] lived the British Hispanist GERALD BRENAN, who universalised the name of Yegen and the customs and traditions of La Alpujarra. The Town Hall, grateful, dedicates this plaque.” YEGEN, 3 JANUARY, 1982