Lady Barbarina was written in Boston in 1883 and first appeared in Century Magazine in May—July 1884. The original publication of this story has the title as Lady Barberina, but when James came to discuss the story in his famous prefaces for the New York edition of his collected works, it became Lady Barbarina. Its first appearance in book form was in the collection of stories Tales of Three Cities published in Boston by Osgood and in London by Macmillan in 1884. 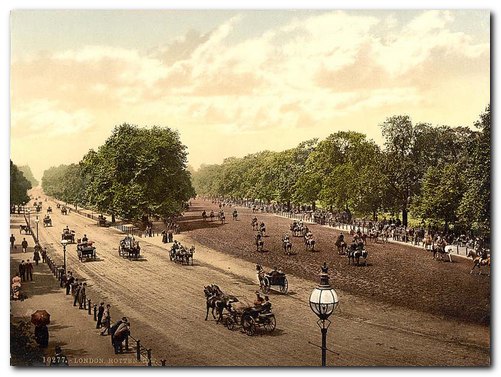 This is one in a long line of James’s ‘International’ stories – tales which are based on the differences between American and European cultures. In many of them an attractive American woman will arrive in Europe and captivate an Italian prince (The Golden Bowl) or an English gentleman (The Wings of the Dove). But this tale reverses the pattern: a rich and successful American man in London is captivated by the sheer ‘Englishness’ of an aristocratic woman who has very little to commend her except her good looks and her heritage.

That is Jackson Lemon’s tragedy. He is blinded by his own Anglomania, and ends up hopelessly uprooted from his native America, saddled with a bloodless wife who doesn’t really love him, and supporting his feckless brother-in-law – a rogue fellow American whose only positive feature is a fine moustache.

Jackson Lemon even has a noble profession. He has trained and practised as a doctor – but he has also inherited his father’s wealth (gained via manufacture). The English aristocrats however even look down on this activity – as if it is demeaning to have any profession at all. Yet they are greedy enough for his wealth to insist on a settlement for their daughter – a guaranteed source of income in the event of any problems, which underlines the financial basis of marriage in the upper class as a means of consolidating wealth.

Yet it has to be said that James treats this subject quite lightly. Jackson Lemon’s open and slightly naive attitude to the English aristocracy is mildly satirised, and the horrendously snobbish, cold, and imperious attitudes of the Cantervilles are illustrated but in the end prevail. They are the ones short of money, and yet Lemon finishes up subsidising them by maintaining their two daughters and son-in-law.

The most striking feature of this tale is its amazingly rushed ending. The story begins at a remarkably leisurely pace – with detailed conversations and atmospheric mise en scenes stretching out page after page. Inconsequential characters such as the Freers occupy much of the dramatic interest, and Lemon’s hesitations and advances are tracked minutely as he pays court to Lady Barbarina

There is a hiatus at the centre of the story during which the first six months of Jackson’s marriage to Lady Barbarina are omitted from the narrative – but this serves to reinforce the dramatic impact of its disappointing outcome.

The second part of the story begins by documenting Lady Barbarina’s dissatisfactions with America, and opens up the sub-plot of Lady Agatha’s enthusiastic embracing of American freedoms. But then no sooner has she eloped with Longstraw than the story is wrapped up as if James had lost interest in his characters and story – or maybe reached the number of words required by the publisher.

Literally within the last page of the story the Jackson Lemons return to London, Lady Barbarina has a little girl, Jackson starts travelling across to the continent to escape his unsatisfactory marriage, and Lady Agatha returns from California with her husband who is a great social success. This is all too much narrative weight for the story to bear.

Elderly Americans Dexter Freer and his wife sit in Hyde Park, discussing the marriage prospects of their fellow countryman Jackson Lemon with a young doctor Sydney Feeder. Jackson Lemon is a very rich non-practising doctor who has been courting Lady Barbarina, the second eldest daughter of an English Marquis. It is thought that despite Lemon’s wealth, his status as a professional will count against him with the aristocracy, even though they themselves are thought not to be particularly wealthy.

Jackson is questioned by Lady Lucretia Beauchemin about his intentions regarding her younger sister Barbarina. She is seeking clarity: he remains non-commital. He realises that English society expects him to reveal his intentions or to desist in his attentions towards Barbarina – but he values his freedom as a democratic American to act as he wishes.

He finds Barbarina physically attractive, but wonders if she will fit in with New York City life. He goes to a late night society dance and discusses American and English marriage customs with Barbarina. He is frustrated by English conventions on social contact, but eventually openly declares his love for her.

Next day he asks her father for permission to marry her, revealing both his wealth and his origins. Lord Canterville asks his wife’s opinions on the matter. She is concerned that her daughter would live in America. There is conflict between Jackson’s open, independent, and free approach to social conventions, and Lady Canterville’s old-fashioned and snobbish conventions.

The Canterville’s accept Jackson’s proposal, but they demand via solicitors that he make a ‘settlement’ (an income) on her – a suggestion that offends him. When he refuses they restrict access to his bride-to-be. They also object to the fact that his wealth is new money, and therefore in their eyes unstable.

When he discusses the matter with his American friend Mrs Freer, she advises him to get out of the engagement because Lady Barbarina’s aristocratic attitudes will never be compatible with life in New York City. Dexter Freer on the other hand encourages him to defy convention. Following this, Jackson decides to give in to the demands of the Cantervilles, because he thinks that making settlements is beneath his dignity.

Six months later the marriage is already in trouble. Lady Barbarina is bored in New York and wishes she were back in England. Her sister Agatha however, who has been sent to accompany her by the Cantervilles, perceives all the advantages of life in America. She forms an attachment to Mrs Lemon and has an admirer in the Californian Hermann Longstraw – of whom Jackson Lemon disapproves. Mrs Lemon is very concerned about her son’s marriage.

Lemon wants his wife to establish a European-style salon in New York, but quite apart from her natural idleness Lady Barbarina thinks that her social rival Mrs Vanderdecken will usurp her. Lady Agatha meanwhile continues to enjoy her newfound freedom and independence. But when Longstraw asks to marry Agatha, Lady Barbarina seizes this as an excuse and insists that she must immediately take her sister back to England.

But Agatha precipitates matters by eloping to California with Longstraw. The scandal of this reckless marriage reaches all the newspapers and the news is relayed to England. At this, Lady Canterville demands that Barbarina return home. Lemon is forced to return to live in England, where he ends up with his cold and unimaginative wife and supporting his improvident brother and sister-in-law.