Nona Vincent first appeared in English Illustrated Magazine in February—March 1892, then later reprinted in The Real Thing and Other Tales (London and New York, 1893). The other stories in the collection were The Chaperon, Greville Fane, and Sir Dominick Ferrand, which also has the title Jersey Villas. 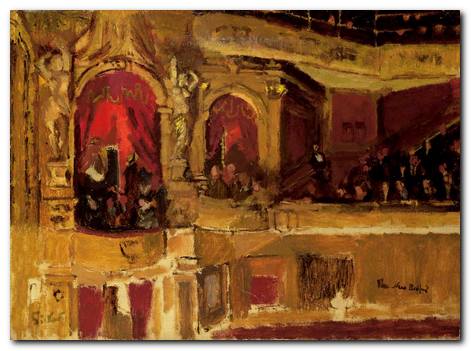 At the time of writing this tale Henry James was in the midst of his own theatrical ambitions, writing plays in the hope of creating a name for himself as a major dramatist. His hopes came to nothing. After five years, his play Guy Domville was booed off stage on its first night.

Nevertheless, James made use of his experiences, and Nona Vincent contains many elelemnts of theatrical life – the difficult search for promotional backing, the stress of rehearsals, the issue of dramatic interpretation, and even the author’s embarrassed curtain call on the first night of his big success.

As a glimpse into the world of the theatre, it is witty and charming, but as a tale its parts do not hang together as well as they might. For instance, there is very little connection between the first part of the story and subsequent events in the second.

For instance there is an unexplained difference between Violet’s meetings with Mrs Alsager. Violet is visited by Mrs Alsager in Part II and provides what is the inspiration for Violet’s much-improved interpretation of her role as Nona Vincent. But Violet has already met Mrs Alsager in the first part of the story, and no reason is provided why the second meeting should have such a dramatic effect.

Wayworth seems to be depicted in the first part of the tale as a failure. He flits from one literary issue to another. Initially he is concerned with literary form, then scenic idea, and finally dramatic form. He is also unsuccessful for two years, which is realistic, but has little connection with his huge success in part two of the tale. He even writes a second play, which has no relevance to the overall story.

The tale also has a very conventional happy ending – with Wayworth’s marriage to the principal lady – though it is interesting to note the fact that she then abandons the stage. This perhaps reflects the fact that even as late at the end of the nineteenth century, acting was seen as a slightly improper occupation for women.

Part I.
Allan Wayworth is a young aspiring dramatist who shares his literary enthusiasms with Mrs Alsager, the wife of a rish newspaper magnate. When he writes a play, it appears that the female lead character (Nona Vincent) is a thinly veiled portrait of Mrs Alsager. She is keen to help him find a theatrical promoter, but after a year with no success, he is reduced to no more than hack work, writing encyclopedia entries. He writes a second play, but that fares no better.

When a manager finally agrees to take up the play, Wayworth attends rehearsals, but is disappointed that the leading lady Violet Grey does not appear to fit her role and does not understand what effects Wayworth wishes to create via her character.

Mrs Alsager contrives a meeting with Violet then reveals to Wayworth that the young girl is in love with him. When he next meets Violet she tells him the same thing about Mrs Alsager.

Part II.
Wayworth begins to feel protective about Violet and has conflicted feelings regarding her future. Mrs Alsager manifests jealous feelings towards Violet. Tensions rise during the rehearsal period, but the first night is success. Violet however feels that she is inadequate for the principal role.

The next day Wayworth has a dreamlike vision of his fictional heroine Nona Vincent, and at that night’s performance, Violet puts on an entirely new interpretation of the role which is a big critical success.

Violet then reveals to Wayworth that she too had a visitation at the same time as his – but in the real form of Mrs Alsager, who provided the living substance and model she needed to understand, appreciate, and act Nona Vincent.

The play runs for two hundred performances, Wayworth marries Violet, and she retires from the stage. But Mrs Alsager continues to attend all Wayworth’s subsequent plays.