society hostess and patron of the arts 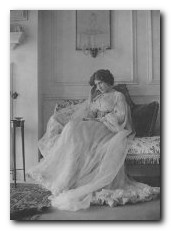 Ottoline Morrell (1873-1938) features in the history of the Bloomsbury Group largely as a hostess and patron of the arts. From 1908 onwards, she entertained a wide circle of political and literary celebrities at her Thursday evening gatherings in Bedford Square, and at her country retreat at Garsington Manor in Oxfordshire. She was born Ottoline Violet Anne Cavendish Bentinck in 1873, acquiring the title of ‘Lady’ when her half-brother inherited the duchy of Portland in 1879, and the family moved into Welbeck Abbey in Nottinghamshire. Ottoline was a cousin of Elizabeth Bowes-Lyon, later to become queen to George VI. She was educated at home and at Somerville College, Oxford, where she studied politics and history.

She married Philip Morrell in 1902 and the marriage lasted for the rest of her life, even though like many members of the Bloomsbury Group, their relationship was far from conventional. They had one child, a daughter, Julian. She had affairs with Bertrand Russell and the painter Augustus John, as well as with Aldous Huxley’s wife, Maria Nijs.

Her husband became a Liberal MP (for Blackburn) following the general election in 1906. He was critical of the government’s position on the First World War. They sheltered a number of conscientious objectors on their farm estate at Garsington near Oxford, including Duncan Grant, Clive Bell, and Mark Gertler. It was there that Siegfried Sassoon, recuperating after a period of sick leave, was encouraged to go absent without leave in a protest against the war.

Her friends and guests included Henry James, Lytton Strachey, Bertrand Russell (who was her lover for a number of years), D.H. Lawrence, Siegfried Sassoon, Leonard Woolf and Virginia Woolf, John Middleton Murry, and Aldous Huxley. Not all of these guests were appreciative, and some of them made fun of her behind her back. There are satirical portraits of her as Hermione Roddice in in Lawrence’s Women in Love (1916) and Aldous Huxley’s Crome Yellow (1921). She was also the inspiration for Lady Caroline Bury in Graham Greene’s It’s a Battlefield, and for Lady Sybilline Quarrell in Alan Bennett’s Forty Years On (1968).

Despite all the scoffing about the luxury and extravagance of Garsington – the truth is that the Morrells were sailing close to the financial edge, and eventually they had to sell the entire Garsington estate. This was because Philip Morrell had two illegitimate sons by his previous mistresses, and the boys needed to be educated – privately of course. Because Ottoline Morrell had a brief relationship with one of her members of staff, it’s assumed by some critics that this provided the creative spark for D.H.Lawrence’s Lady Chatterley’s Lover.