Canetti amidst English modernists during the war

The first three volumes of Elias Canetti’s memoirs cover the period 1905 to 1937. The Tongue Set Free traces his precocious childhood in Bulgaria, Manchester, Vienna, and Zurich; The Torch in my Ear describes his years in Frankfurt, Vienna, and Berlin as he mixed with German modernists and established his reputation as a writer; then The Play of the Eyes details his affair with Alma Mahler’s daughter as well as his friendships with writers such as Robert Musil and Hermann Broch. This fourth volume Party in the Blitz takes up the story when like many other European refugees he sought asylum in England (London, Hampstead) during the war. 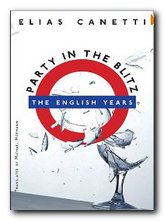 He is very grateful to England and the protection it offered him, and some of the better pages of this volume are devoted to an appreciation of English history and culture. There’s very little in the way of a continuous argument or a well-planned chronology – because the memoir is put together from journal entries, diaries, and fragments he left behind on his death in 1994. The lack of coherence can sometimes be disconcerting – William Empson’s parties and Margaret Thatcher’s Argentinean war policy discussed on the same page for instance.

Basically he takes a character or a topic and dredges up his ideas and impressions from fifty years previously. He seems to have known everybody who was anybody around that time – Dylan Thomas, Roland Penrose, Vaughan Williams, Herbert Read, Arthur Waley, Bertrand Russell, and J.D. Bernal.

The most amazing thing is that there’s no account of his own development as a writer or an intellectual. He doesn’t say what he was reading or writing; there is no sense of work completed that would lead to the Nobel Prize in 1981; and nothing he says is related to either his own cultural heritage or the development of European modernism in the first half of the twentieth century.

He is largely concerned with anecdotes and character sketches of completely inconsequential upper-class toffs and their servants amongst whom he seems to have spent his time. For a man who was supposed to be an intellectual and a writer, it’s amazing to note that the bulk of these pages are taken up by either attacking his contemporaries or driving round Britain in fast cars with dissolute members of the fallen aristocracy – people who he is pleased to relate, can trace their ancestry back to the Norman conquest.

He seems to be most sympathetic to people like himself – the self-confessed misogynist Arthur Waley; the womanizer Bertrand Russell; and a young Enoch Powell, smarting with anguish at the loss of India as part of the British Empire.

London in the war years was a centre for European emigres of all kinds – Kurt Schwitters and Oskar Kokoschka mingle with native artists Stevie Smith, Henry Moore, and Katherine Raine. There are pitilessly cruel portraits of Iris Murdoch, Katherine Raine, and Veronica Wedgewood – all of whom were his former lovers.

You could call Iris Murdoch the bubbling Oxford stewpot. Everything I despise about English life is in her. You could imagine her speaking incessantly, as a tutor, and incessantly listening: in the pub, in bed, in conversation with her male or female lovers … She invited me to Oxford, and met me at the station. She was wearing grotesque sandals, which showed off her large flat feet to terrible disadvantage … she would always come in slovenly academic gear, graceless in her wool or sacking dresses, never really seductive, sometimes in the wrong colours (she didn’t have the ghost of an aesthetic sense where her own clothes were concerned)

What he doesn’t take into account or ask himself is why if he found these women so repugnant, he should become sexually involved with them – as he was, with the full knowledge of his wife. Whilst he fills pages listing the shallowness and failures of his lovers, he says nothing whatever about his wife Veza, the woman to whom he was married throughout all these years. You would never know from these pages that she was a novelist in her own right, and that she had sacrificed much of her time to help him finish Crowds and Power.

But he reserves his most concentrated vitriol for T.S. Eliot, who he berates for embracing English traditions, working in a bank, and writing plays for money.

An American brings over a Frenchman from Paris, someone who died young (Laforgue), drools his self-loathing over him, lives quite literally as a bank clerk, while at the same time he criticises and diminishes anything that was before … and comes up with the end result: an impotency which he shares around with the whole country; he kowtows to any order that’s sufficiently venerable … tormented by his nymphomaniac of a wife …

And for all that Canetti obviously considers himself the great “Dichter”, the only two books he mentions in the four volumes of these memoirs are Auto-da-Fe which he had written by the time he was twenty-six, and Crowds and Power, a study that took him thirty years to bring to completion – a study that in the words of Clive James ‘advanced a thesis no more gripping than its title’.

These are memoirs written in spleen and resentment, and it’s possible that there might be even more to come. Canetti put a twenty-two year embargo on his diaries and personal writings that will not expire until 2024. But it seems unlikely that further revelations will endear him to a new generation of readers, even if that Nobel committee did give him a prize.