Phyllis and Rosamond (1906) is of particular interest because it is Virginia Woolf’s first short story. She had begun to write book reviews and essays two years earlier, and some elements of the exploratory essay and the intellectual study are present here: indeed, she would continue to blend philosophic reflections with narrative fiction throughout the rest of her career. The story was written in June 1906 and was never published in her own lifetime.

Virginia Woolf began her writing life in the shadow of her father Sir Leslie Stephen, a famous nineteenth century essayist and biographer. Even her own first writings were essays and reviews, and it is interesting to note that she often blends other genres with that of the short story.

Phyllis and Rosamond begins in the mode of a discursive essay before it settles into any sort of dramatised narrative.

Let each man, I heard it said the other day, write down the details of a day’s work; posterity will be as glad of the catalogue as we should be if we had such a record of how the doorkeeper at the Globe, and the man who kept the Park gates passed Saturday March 18th in the year of our Lord 1568.

This is an approach to the short story she would often repeat – an idea or an observation of a quasi-philosophic nature, which is then illustrated by the story that follows.

And the story itself has very little drama, plot, or even suspense. It is an account of the tension between the imaginative nature of the two sisters and the stifling social conditions in which they find themselves. We are simply invited to contemplate their dilemma.

Woolf is picking up the baton of earlier writers of short stories – Maupassant and Chekhov (who she had read) – and continuing their narrative strategies of minimising overt drama in favour of a more contemplative and poetic juxtaposition of significant detail.

It is interesting to note that in this, the first of her many experimental short stories, Woolf flags up a number of the important large scale issues which were to emerge more fully developed in her later works – particularly studies such as A Room of One’s Own and Three Guineas. Her consciousness of history, her interest in biography, and her perception of women’s role in society are all foregrounded in the very first paragraphs of this story.

And as such portraits as we have are almost inevitably of the male sex, who strut more prominently across the stage, it seems worth while to take as model one of those many women who cluster in the shade. For a study of history and biography convinces any right minded person that these obscure figures occupy a place not unlike that of the showman’s hand in the dance of the marionettes;

Woolf’s argument is that the lives of women such as Phyllis and Rosamond are worth recording, even though they are trapped in a lifeless stasis, waiting to become married. In fact she is arguing that this quasi-tragic waste of spirit and imagination is worth recording just because it is so common, so typical, and yet unrecorded.

The story conveys an acute sense of the intellectual and cultural stimulation Phyllis finds in the free-ranging discussion (which is not dramatised) compared with the boring rituals of her home life. Radical ideas are expressed, religious belief is challenged, and dangerous topics such as love and marriage are frankly explored.

This is a fictionalisation of the experiences which had led Virginia Woolf (and her sister Vanessa) to depart their Victorian home in Kensington two years before, and de-camp to what was seen at the time as the bohemian milieu of Gordon Square, Bloomsbury.

It is interesting to note that although she had made that cultural transition in her own personal life, she chose to fictionalise the more typical experience of women who were unable to make the transition.

It is a common case, because after all there are many young women, born of well-to-do, respectable, official parents; and they must all meet much the same problems, and there can be, unfortunately, but little variety in the answers they make.

Phyllis and Rosamond are two daughters of a prominent civil servant Sir William Hibbert and his wife Lady Hibbert. They live in the centre of London and are ‘daughters at home’. That is, they have no occupation or career of any kind, and can expect no change in life except to be married, which their mother is very eager should happen.

The story lists the suffocating ritual of everyday upper class life, from breakfast to bedtime, a period which is only punctuated by their mother giving them petty domestic jobs to perform. They draw comfort from each other in their shared sense of oppression and the few private moments during which they can share ideas.

Their father brings work colleagues home to lunch, an occasion which is an empty ritual during which Phyllis is expected to make meaningful contact with Mr Middleton, who is being cast as a potential suitor. The two sisters agree that the man has no imagination or intelligence at all.

Later in the day they make social calls with their mother – leaving visiting cards at other people’s houses in the hope of being invited there. Then tea at six o’clock is followed by dinner at eight.

Finally Phyllis escapes to join her sister at the Tristrams, who live in a ‘distant and unfashionable’ part of the city – Bloomsbury. The group of people assembled there are free-thinking radicals who are discussing ideas. Phyllis has a disturbing experience of tension. She is excited by the intellectual atmosphere but conscious of herself as looking like something from a Romney painting.

The group discuss art and even love and marriage. Phyllis thinks herself inadequate in this heady environment, and feels that it is almost impossible to enter a world where people can choose freely who they might love. The hostess Sylvia Tristram tries to engage the sisters, but Phyllis feels that she cannot be at ease either at home or in such a bohemian milieu, concluding wistfully that ‘We might have been something better’. 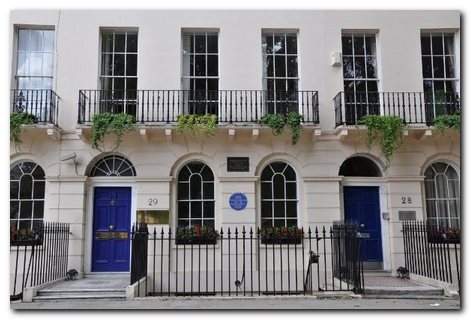