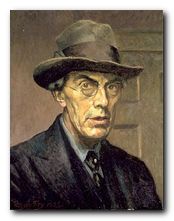 Roger Fry was an influential art historian and a key figure in the Bloomsbury Group. He was born in 1866 in Highgate, London, into a wealthy Quaker family. He studied at King’s College, Cambridge, where he took a first in the Natural Science ‘tripos’. Much to his family’s regret, he decided after university to pursue an artistic career rather than continue his scientific studies. In 1891 Fry went to Italy and then Paris, to study painting. He began to lecture on art, and became a critic and author. He made his debut in art criticism in 1893 with a review of George Moore’s book Modern Art for the Cambridge Review. Then in 1894 he began lecturing on Italian art for the Cambridge Extension Movement (classes for working people).

He married the artist Helen Coombe in 1896, but although his career as an artist and critic was a success, his personal life was troubled. His wife suffered from mental illness and had to be committed to an institution, where she stayed until her death in 1937. Fry was left to look after their children Pamela and Julian.

His first book on Giovanni Bellini, was published in 1899. He regularly contributed articles and criticism to the magazines Monthly Review and The Athenaeum, and in 1903 he was involved in the founding of Burlington Magazine, acting as joint editor between 1909-18, and making it into one of the most important art magazines in Britain. From 1905 to 1910, he was the Curator of Paintings for the Metropolitan Museum in New York.

He first met the artists Clive Bell and Vanessa Bell in 1910, when they invited him to lecture at Vanessa’s Friday Club. This was the artistic equivalent of her brother Thoby’s literary soirees held on Thursday evenings. He subsequently became a regular member of the Bloomsbury Group, and Virginia Woolf later wrote his biography. His affair with her sister Vanessa Bell began in 1911 when he accompanied the Bells on a holiday to Turkey. It ended when she transferred her affections to Duncan Grant in 1913.

In 1910, Fry organized the first Post-Impressionist exhibition (and indeed, coined the phrase) for the Grafton Galleries in London, and later published books on Cézanne (1927), and Matisse (1930). In 1913, he organized the Omega Workshops, a collective that encouraged the involvement of young artists in the design and decoration of everyday functional objects. This remained active until 1919.

Fry re-edited and updated a collection of his best articles and writings to produce his best known book, Vision and Design which was published in 1920. As well as Western art, the book examined the use of form and aesthetics in ethnic art from Africa, America and Asia. It was a great success, reinforcing his position as England’s leading critic and it is still recognised as an extremely influential work in the development of modernist theory.

In his ideas, Fry emphasised the importance of ‘form’ over ‘content’: that is, how a work looks, rather than what it is about. He thought that artists should use colour and arrangement of forms rather than the subject to express their ideas and feelings, and that works of art should not be judged by how accurately they represent reality.

In his personal life, it was not until 1924 after several short lived relationships (including affairs with Nina Hamnett, one of the Omega artists; and Josette Coatmellec, which ended tragically with her suicide), that he found happiness with Helen Anrep. Twenty years his junior, she left her husband and became a great support to Fry in his career, and lived with him until his death.

In 1933 Fry was offered the post of Slade Professor at Cambridge and began a series of lectures on the nature of art history that he was never to complete. The text for the lectures was published after his death in 1939 as Last Lectures. Fry died on 9 September 1934 following a fall at his London home. His ashes were placed in the vault of Kings College Chapel, Cambridge, in a casket decorated by Vanessa Bell.