Duncan Grant came from a privileged upper class family in Scotland where he spent childhood holidays with his cousins the Stracheys (including Lytton Strachey who later became his lover) amidst a family whose eccentric behaviour reads like the events of a PG Wodehouse story. He went to Rugby School with Rupert Brooke and then lived with Lytton Strachey at Lancaster Gate. Duncan Grant and the Bloomsbury Group concentrates on his life and work amidst this illustrious collection of aesthetes.

Douglas Turnbaugh’s narrative weaves in an out of his many affaires as a young man – Strachey, Arthur Hobhouse, John Maynard Keynes – but also emphasises his hard work in trying to become a successful artist, studying the old masters, copying them, and attending art schools in London and Paris. Grant’s life merged with that of the Bloomsbury set when he took up residence with the Stephens in Gordon Square. He and Keynes lived on the ground floor; Adrian Stephen on the first floor; Virginia Woolf on the second; and Leonard Woolf on the top floor.

He joined the Omega workshop which was organised by Roger Fry, subsequently replacing him as Vanessa Bell’s lover – despite the fact that he was her brother’s lover at the time. Then during the war he was like most of the Bloomsberries a conscientious objector. He became the father of Vanessa Bell’s daughter Angelica, who was passed off as the daughter of Clive Bell – to whom Vanessa was still married.

In the 1920s Vanessa learned to tolerate his affairs with a succession of younger men. In fact the whole family became involved in this sexual ambiguity when Julian Bell, Vanessa’s son, studying at Cambridge, began sleeping with Anthony Blunt – who later turned out to be simultaneously Keeper of the Queen’s pictures and a Soviet spy.

The cruelty of concealing the true identity of Angelica Bell’s father came home to roost in the late 1930s when she discovered the truth, and reacted to it by marrying another of her father’s ex-lover, David Garnett – which caused a rift in the family. [She gives her own account of these events, plus a picture of her Bloomsbury childhood, in Deceived with Kindness.]

In 1946, at the age of 60, he met the young Paul Roche, who was to be the main love of his late life and a serious threat to Vanessa. His work in the immediate post war period was considered unfashionable, but he continued working, mainly on decorative projects and private commissions. In the 1960s and 70s however, his reputation revived and he continued painting and pursuing young men with a remarkable degree of success until his death at the age of ninety-three.

This is a rather uncritical biography, but it captures the spirit of the ages in which Duncan Grant lived quite well, and it is rich in anecdote. The book is generously illustrated with Grant’s work and portraits of the Bloomsberries, and it has a good bibliography. I bought my copy second hand on Amazon to flesh out my collection of Bloomsbury materials, and although it is a little dated it turned out to be really good value.

I’ve been a long time fan of the work of Howard Hodgkin. (So much so that I opened a gallery devoted to his work here.) He has a great sense of form, uses luscious colours, and produces semi-abstracted compositions which are like rich food for the visual sense. The problem in interpreting his work is that there’s a tension between the degree of abstraction of the image and its ostensible subject, usually stated in its title. Hodgkin claims that he is a ‘realist’ painter, but it’s sometimes difficult to understand how a couple of deep blue brush strokes across the centre of a green stippled canvas whose frame is dripping in blood red gloss represents ‘An Evening with Kevin’. 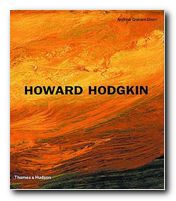 Andrew Graham-Dixon’s study is an attempt to solve this problem. He presents a historical survey of Hodgkin’s work which is beautifully illustrated in the full colour it deserves. It’s an approach to art criticism which is well informed (in biographical terms) which pays attention to the details of what appears on the canvas, and yet which seems to stop short of interpretation.

He does his best to make the case for representation by suggesting that Hodgkin paints memories, feelings, and moods; but when it comes to evaluating individual works he hides behind a smokescreen of supposition and conditionality. His argument goes something like this, in

this painting may have some connection with … it recalls someone else … it might have affinity with …. it can also evoke …and it might be said to represent something …

He describes almost every brush stroke in gushing prose, but he hasn’t got any hard evidence to offer. And whilst he’s getting his critical knickers in a twist, he doesn’t address glaringly obvious issues such as the fact that Hodgkin paints over the frames of his pictures. Why does he do that? What’s the significance of such a bold gesture?

It’s interesting to note that after running out of meaningful things to say about the paintings, he’s quite prepared to go on talking about their titles. And in the end, this might be the problem.

If a glamorous canvas of deep greens splashed against a black border, with red and yellow dots in the background were called Composition #9 there might be less fuss than if it were given the title In the bedroom . Andrew Graham-Dixon would be less preciously strangulated, and we could just enjoy some more coloured paint on canvas. 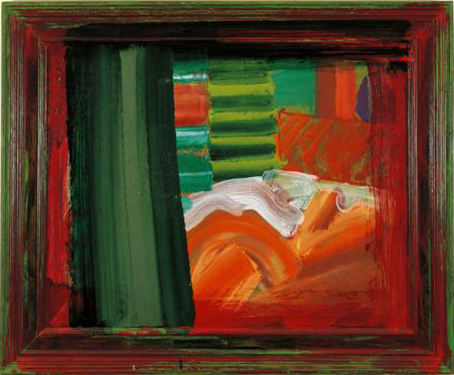 In bed in Venice

But Hodgkin does give his paintings apparently descriptive titles – such as Nick 1977 which looks like two windows covered by Venetian blinds, You Again 2001 which is three interlocking pyramids, and Learning About Russian Music 1999 in which a red and ochre frame surrounds blue, green, and brown brush strokes. So the problem remains.

There is the merest smidgeon of representation still present in his work, but the acid test would be guess the subject if the paintings were not captioned. I doubt if Andrew Graham-Dixon or anyone else could do it.

Fortunately, I don’t think it matters in the end. Personally, I am quite happy to accept Hodgkin as a quasi-abstract painter whose sense of colour is simply ravishing. The reproductions of the paintings here are excellent, and this is a good-value survey of them. 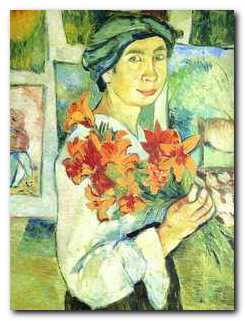