a ‘major’ in the heart of the Bloomsbury Group

Ralph Partridge (real name Reginald Sherring Partridge) was born in 1894. His father was in the Indian civil service. Ralph was educated at Christ Church college, Oxford University. On the outbreak of the first world war he joined the British Army, and served throughout until 1918, reaching the rank of major. During that time he met and befriended Gerald Brenan, who was also serving in the army as a captain. 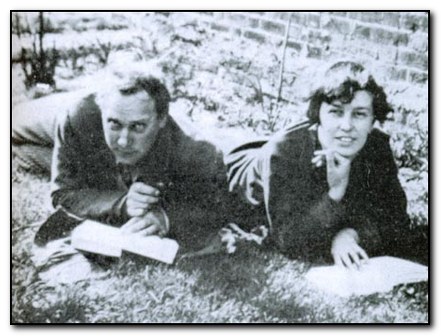 At the end of the war he returned to Oxford to finish his education. There he met the book designer Noel Carrington, who in 1918 introduced him to his sister, the painter Dora Carrington. At that time Dora (who was known simply as ‘Carrington’) was living in Tidmarch, Berkshire with the writer Lytton Strachey, who had just had a big success with his study Eminent Victorians. Strachey was a homosexual, but Carrington had fallen in love with him and devoted herself to his wellbeing. It was Strachey who christened Partridge with the nickname ‘Ralph’. These connections gave Partridge the entree to the Bloomsbury Group and its members.

Partridge moved into the farmhouse at Mill House, and Carrington began an affair with him. She was attracted to a man who was tall, physically robust, and very handsome. He was known amongst the Bloomsbury Group people as ‘the major’. Rather conveniently, Lytton Strachey also fell in love with him, and they developed a curious three-sided relationship – although biographical evidence suggests that Partridge was entirely heterosexual.

In the summer of 1920 Partridge began work for Virginia Woolf and Leonard Woolf at the Hogarth Press. This gave him just enough money to marry Carrington in 1921. Strachey very generously paid for their wedding, and all three of them even went on honeymoon together to Venice. They were also friendly with Partridge’s old wartime colleague Gerald Brenan, and in 1922 travelled to visit him at his retreat in the mountains of Andalusia.

An affair between Carrinton and Brenan developed on this visit, and caused a temporary rift between the two wartime comrades. Partridge felt deeply wounded by this act of betrayal by his friend, but Lytton Strachey persuaded him not to sacrifice the friendship, and after two years Partridge eventually got over it. However, the marriage was never the same again.

In 1924 Partridge and Strachey jointly purchased Ham Spray House near Hungerford in the Wiltshire Downs. The menage a trois continued, but through his work for the Hogarth Press Partridge met Frances Marshall whilst she was working in David Garnett‘s bookshop in Taviton Street, Bloomsbury. A relationship developed between them, and in 1925 they went on holiday to Spain together. They planned to live together in London, but Lytton Strachey argued that this would cause a break up of the three-pillared unity at Ham Spray.

However, Carrington eventually agreed to ‘share’ her husband with Frances and in 1926 Partridge and Francis moved to live in the house of psycho-analysts James and Alix Strachey in Gordon Square, Bloomsbury. Ralph went back to see his wife and Lytton Strachey at weekends. But in early 1932 Lytton Strachey died very suddenly from stomach cancer, after which Carrington committed suicide. Since Partridge was still legal owner of Ham Spray House, he moved back there with Frances, and they were married the following year.

According to The Times: “For the next thirty years, the marriage was extraordinarily close. Ralph, very good-looking, was highly intelligent and loyal, but not always easy. He had a formidable presence and loved arguing. Frances was his equal in debate, and never lost her head; and she could soothe him. More important were their intense interest in people and their highly developed senses of humour. They talked about everything together, and for the last twenty-eight years were never apart for more than a day. Few marriages can have been so enjoyable, not just for the lucky (and skilful) couple, but for their friends.” Ralph Partridge died of a heart-attack in 1960.