The Bench of Desolation (1909) comes from the late period of James’s career as a writer of short stories, and with such a title readers might understandably assume it was similar to his late dark masterpieces such as The Beast in the Jungle and The Altar of the Dead. Indeed, the first two thirds of the story are marked by a mood of gloom which intensifies as the misery of the protagonist’s life becomes more protracted. But this atmosphere is completely dispelled by a resolution to the story which is as unexpected as it is improbable and unexplained. 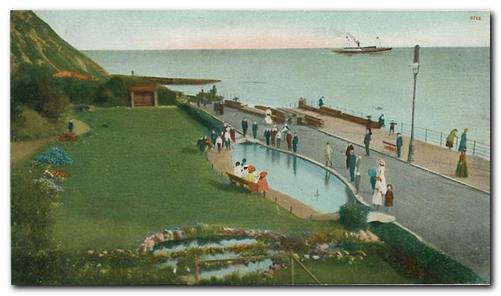 The Bench of Desolation – critical commentary

Is this story a lavish piece of wish-fulfilment on James’s part? It starts with the subject of one of his recurrent themes – the fearful prospect of marriage and its responsibilities. In fact it encompasses the fear of both the prospect and the consequences of marriage reflected in legal confrontation, public exposure, and financial punishment, followed by social death.

This clearly characterises the first part of the story, as Herbert Dodd is projected into his downward spiral of doom. But this scenario is completely dispelled in the latter part of the story. There is no credible justification provided for Herbert Dodd’s good fortune, and one can only think that it’s a form of wish-fulfilment on James’s part to come up with a resolution to this story which involves an old flame emerging from the past to offer both undiminished adoration and a large pot of money.

In fact the story suffers credibility weaknesses on two counts. First of all, no convincing motivation is provided for Kate Cookham’s ten year vigil. She has ruined Herbert financially by the original out-of-court settlement. He has subsequently married, become a widower, and sunk even lower in the social scale with no intervening contact between them to sustain either love or good will. But we are expected to believe that she has loved him and wished for his best interests throughout the decade. She even claims to have ‘hated’ what she was doing to him for ten years. We are given no explanation for her behaviour – only her statement of intent.

The second weakness is that not only has she worked and saved for a decade to repay him, but she is repaying his original two hundred and seventy pounds with interest. This original sum has accumulated simple interest of one hundred pounds a year to produce a total of twelve hundred and sixty pounds. That is a rate of return of thirty-seven per cent which even in the most prosperous years of the industrial revolution and the high point of British imperialism would have been impossible. Interest rates historically hover between three and ten percent. We can’t expect novelists to be professional economists or financial analysts, but we can object to their providing fairy tale pots of gold to furnish plot resolutions.

The story also has a rather uneven tone. At the beginning of the narrative Herbert Dodd is an almost comic figure – a vain, somewhat self-regarding character with a disdainful attitude to his low station in life. He could be seen as the Mr Pooter of the south coast. But as the misery of his blighted life begins to bite deeper, his seat on ‘the bench of desolation’ is a much more sombre affair. His state of tired resignation to a completely uneventful existence is something we are invited to take seriously. Having established this deeper mood, one would expect James to lead it towards a more logical and tragic conclusion, but instead of turning the screw tighter, he releases it to return to a mood of almost drawing room comedy.

The Bench of Desolation – study resources

The Bench of Desolation – read the story on line

The Prefaces of Henry James – Introductions to his works – Amazon UK

The Bench of Desolation – plot summary

Herbert Dodd has inherited a shop selling old books and prints in a ‘fourth-rate’ seaside town on the south coast of England. He becomes engaged to Kate Cookham, one of his customers, but when he changes his mind she threatens to sue him for breach of promise. He settles out of court for four hundred pounds compensation, mortgages his business, and in fact only pays her two hundred and seventy pounds.

He confides his plight to an old flame Nan Drury, and ends up marrying her. They have two children who die, as does she. The solicitors handling his mortgage go into liquidation because one of its partners embezzles from the firm, and his business is seized by creditors. He gets a job working as a petty clerk for the local gas works and begins to wonder in his misery at what might have happened if he had challenged Kate Cookham over the four hundred pound settlement.

Ten years pass, and his life is reduced to a meaningless void, when suddenly a much-improved Kate Cookham returns from London, seeks him out on his lonely seafront bench, and invites him to tea at her hotel. She reveals that she has taken his money, invested it, and wants to pay him back – with interest, because she loved him all the time. He is shocked by the news of her offer, but a week later he accepts the money – and her.