The New Dress was probably written in early 1925 and first published in the American magazine Forum for May 1927. It was later reprinted in A Haunted House (1944) and was one of a number of stories that Virginia Woolf wrote featuring guests at a party given by Clarissa Dalloway. These stories were collected in the 1973 publication, Mrs Dalloway’s Party. 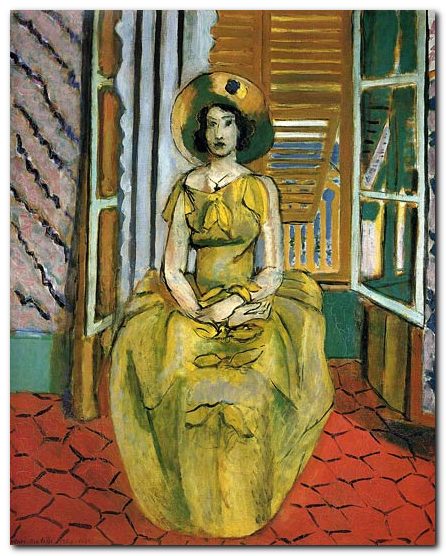 This is one of a number of stories Virginia Woolf wrote which feature guests at a party given by Clarissa Dalloway at her home in Westminster, London. The stories are miniature studies featuring states of uncertain consciousness, failures of communication, instances of egoism, and just occasionally moments of positive epiphany.

Mabel Waring is a study in the fragility of the individual ego. She is socially insecure, and is mixing with people in a class above that to which she belongs. Moreover she is measuring herself against a social code to which she looks up but cannot aspire.

All her notions of self worth are based on the fashionability (or otherwise) of her dress. She has chosen it from an old fashion magazine, and suddenly realises that although she has gone to great trouble and expense, she is unable to buy her way into genuine social acceptability. As a result she feels a crushing sense of inadequacy:

She had always been a fretful, weak, unsatisfactory mother, a wobbly wife, lolling about in a kind of twilight existence with nothing very clear or very bold or more one thing than another, like all her brothers and sisters

She comforts herself with romantic notions of changing her life and ridding herself of the need to conform to the mores of fashionable society:

But she knows that such fantasies are false, and as she exits Mrs Dalloway’s party saying how much she has enjoyed herself, she sums up the whole experience to herself with the words ‘Lies, lies, lies!’

It is worth noting that this incident is viewed quite differently in one of the other stories from the Mrs Dalloway’s Party sequence. George Carslake, the central figure in A Simple Melody sees Mabel leaving the party and notes her discomfort.

Just as he was thinking this, he saw Mabel Waring going away, in her pretty yellow dress. She looked agitated, with a strained expression and fixed unhappy eyes for all she tried to look animated.

We know that Mabel Waring feels her new yellow dress is a fashion choice disaster which she feels has resulted in her social humiliation. Yet Carslake sees the dress as ‘pretty’ – which confirms that her agitation is a self-induced sense of insecurity. It also introduces an element of literary relativism in which the same incident is seen from different points of view.

It is interesting that Woolf focuses this negative experience on the issue of clothing. She herself had an ambiguous attitude to the subject. She often dressed in a shabby unfashionable manner herself, and was the subject of much teasing by her friends. And yet especially in her later life she was photographed wearing very elegant outfits, she wrote articles for Vogue magazine, and was once taken shopping by its fashion editor.

In her story Ancestors (also located at Mrs Dalloway’s party) the guest Mrs Vallance is irritated by complimentary remarks made by a young man Jack Renshaw to a younger woman wearing fashionable clothes. She sees it as a mark of his triviality.

Mabel Waring, a middle-aged and lower middle-class woman, arrives at a party given by Mrs Clarissa Dalloway in Westminster, London. She is wearing a new yellow dress made specially for the occasion, and she feels intensely that it s neither fashionable nor successful. She has selected the design from an old fashion book and now feels she has made a huge mistake. She feels inferior to the other guests and thinks of herself as a fly unsuccessfully trying to climb out of a saucer of milk.

She has been quite happy in anticipation of the event when having the dress made by the seamstress Miss Milan, but now she feels socially inadequate when surrounded by other people, all of whom she sees as critical of her or insincere in their remarks. When other guests speak to her she feels that they are clamouring selfishly for attention.

She feels she has been condemned to her unglamorous life because of her poor family background. She recognises that her life has provided moments of happiness, but she feels that having reached middle age they might become less frequent. She has fleeting romantic thoughts of transforming her own life so that she will not feel so inadequate. This gives her the impetus to leave the party, which she does by telling Mrs Dalloway how much she has enjoyed herself – which she knows to be a lie.