The Partner was written in 1911 and first published by J.M.Dent & Sons in the collection Within the Tides (1915). The other stories in this volume were The Planter of Malata, The Inn of the Two Witches, and Because of the Dollars. 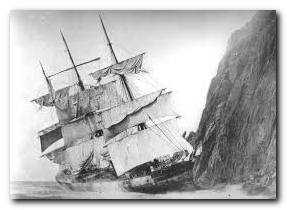 It is worth stressing that the tale has two narrators – an un-named outer narrator who is a writer of some kind, and the inner narrator who at the start of the tale mentions going to London on business, but at the end is referred to as a ‘stevedore’.

The principal conceit of the tale is that during their ‘conversation’ the inner narrator is delivering the events of the narrative as the raw materials for a story he suggests the outer narrator can convert into a written account. The inner narrator also stresses that it is is a true story, rather than something that has been invented. Conrad (writing tongue in cheek as it were) has his outer narrator observe: “It’s said that truth is stranger than fiction.”

But an even greater irony of fictional construction is that the inner-narrator’s monologue is exactly what constitutes the story entitled The Partner. At the end of the tale the outer narrator claims that the incident was unsuitable for turning into fiction:

The story to be acceptable should have been transposed to somewhere in the South Seas. But it would have been too much trouble to cook it for the consumption of magazine readers. So here it is raw, so to speak — just as it was told to me — but unfortunately robbed of the striking effect of the narrator;

This is rather typical of Conrad’s dry and lofty sense of humour – almost at his own expense – because in fact he successfully creates an impassioned narrator who delivers his tale in an authentically oral manner, with a great deal of the characteristics of casual saloon bar conversation, including a fractured chronology of events; a narrative almost indistinguishable from interpolated comment and reported speech; delivered in incomplete sentences; and with frequent use of the vivid present tense:

George had no children. Married a couple of years; looked forward to a kid or two very much. Feels more upset than ever. Talks about an honest man for a father and so on. Cloete grins: You be quick before they come, and they’ll have a rich man for a father, and no one the worse for it. That’s the beauty of the thing.

The Partner is one of a number of Conrad’s tales (and novels) in which one character relates to another a series of events which involve a third character. One thinks of the sequence of information links in a novel such as Lord Jim for instance, where an un-named outer narrator relays a story told to him by the inner narrator Marlow, concerning events in the life of the eponymous Jim – some of which come from yet another source (Gentleman Brown). This is an extremely complex and often risky strategy which sometimes leads Conrad to the outer reaches of credibility and beyond – for instance in the case of Chance and Nostromo.

Fortunately in The Partner the logic of the information sources is kept just within the boundary of credibility. The outer narrator presents us with the extended monologue of the inner narrator, who knows the principal characters in the story. His main source of information is Cloete, who is present at almost all the events of the drama, and who has relayed the story to the inner narrator prior to his return to America.

The only crucial scene at which Cloete is not present is Stafford’s moral panic when he is locked in the captain’s cabin on the sinking Sagamore. This sequence of events (which Conrad presents as the climax of the tale) is revealed in Stafford’s dying confession to a dockyard priest – who in his turn relates it to the inner narrator (presumably violating any vows of confidentiality by doing so).

The Partner – CreateSpace edn – Amazon US

The Partner – eBooks at Project Gutenberg

An un-named narrator (‘a writer of stories’) is engaged in conversation with a somewhat desperate man of in the smoking room of a hotel at Westport on the English Channel. The writer sees the coastline and rocks outside in a romantic, painterly manner – but the man insists that the truth is quite otherwise. He then recounts in a fragmentary and telegraphic manner a tale which culminates with a shipwreck on the same rocks.

Two brothers, George and Harry Dunbar, are in a business partnership. They have bought the sailing ship Sagamore from its previous owners. Harry Dunbar is captain of the ship and George runs an import and export office in London . When a persuasive salesman called Cloete arrives from America with a few hundred pounds to invest, they make him a partner.

George has a young wife with expensive tastes. When his part of the business hits a period of recession, Cloete tries to persuade him to invest in a patent medicine venture. He first suggests selling the Sagamore, and then proposes deliberately wrecking it to claim the insurance money. George is indignant at this suggestion, but Cloete is persistent, and plays on George’s weakness.

Cloete has meanwhile located Stafford, a disgraced down-and-out seaman, who he persuades to take on the task of wrecking the ship in exchange for five hundred pounds. George claims that Harry will be going back to sea on the next voyage, and Cloete arranges for Stafford to join the ship as chief mate. On doing so, Stafford immediately tampers with the anchor cables.

Ten days later there are reports that the Sagamore has run aground on the rocks in a storm just outside Westport where the story began. Lifeboats have taken some people ashore, but captain Harry is still on board. Cloete thinks his scheme of wrecking the ship has been achieved providentially. He joins Harry and his skeleton crew on board the stricken ship, where the captain asks his ‘partner’ to recover a bag of golden sovereigns and some important papers from his cabin.

When Cloete goes below he is joined by Stafford, who now demands a thousand pounds for his work, otherwise he will disclose the plan of deliberate sabotage to the ship’s insurers. In response, Cloete knocks him down and locks him in the cabin of the sinking ship.

Returning empty-handed, Cloete gets into the lifeboat, so captain Harry goes to retrieve the papers and money himself. Amidst the confusion and the storm, Stafford suddenly appears alongside Cloete in the lifeboat. The coxswain of the lifeboat, sensing that something is wrong, goes back on board with Cloete to look for the captain. They find him dead from a gunshot wound in his cabin, surrounded by the ship’s papers which have been set alight.

When they return to shore Cloete billets Stafford in a nearby hotel and breaks the news to George Dunbar and Harry’s wife. George thinks they can now invest money in the patent medicine scheme, and Harry’s wife goes mad with grief. When Cloete goes back to the hotel, Stafford demands even more money and threatens to report Cloete for attempted murder. He relates how he shot captain Harry, thinking it was Cloete. But in response Cloete counter-threatens him, saying he will report him for murder during a robbery on board.

In the aftermath of the affair, there is not enough money to buy into Cloete’s patent medicine scheme, so other investors are found – and they make a fortune out of ‘Parker’s Lively Lumbago Pills’. Cloete is disillusioned and returns to America, and Stafford dies in an East End hospital.