The Planter of Malata was written in 1914, and first appeared as part of the collection Within the Tides published by J.M. Dent and Sons in 1915. The other stories in the volume were The Partner, The Inn of the Two Witches, and Because of the Dollars. 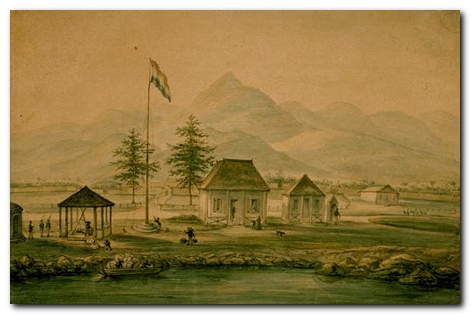 The Planter of Malata – critical commentary

Most first-time readers will have little difficulty working out the mystery of the assistant’s identity. That’s largely because all the communication links between the island, the imperial city, and the correspondent in England are spelled out in a way that draws attention to them. It’s also because the very existence of the assistant acts as a form of what is known as ‘Chekhov’s gun’. This is a dramatic principle established by the Russian dramatist and short story writer that everything in a narrative should be necessary and anything unnecessary should be removed.

If you say in the first chapter that there is a rifle hanging on the wall, in the second or third chapter it absolutely must go off. If it’s not going to be fired, it shouldn’t be hanging there.

After all, Renouard wants to live alone; he does not need an assistant; and he rather uncharacteristically takes him on without knowing anything about him. If the assistant did not have any significance for the narrative, there would be no requirement for his existence in it.

Vigilant readers will suspect this plot development in advance, but Conrad adds a very dramatic twist with the news that the assistant is in fact dead. This is cheating slightly in the compact between author and reader, because we have no way of knowing or even suspecting this in advance. Renouard knows that his assistant is dead, but in the early part of the tale he does not necessarily know that this is the man the Moorsom’s are looking for – because of the confusion in names. They are searching for ‘Arthur’: he only knows that his assistant was called ‘A.Walter’.

If there is a submerged theme it is that of ‘disappearance’. Renouard wishes to disappear from society in general – which is why he has established himself on the remote island of Malata in the first place. He is drawn back into the gravitational field of society by the powerful sexual attraction he feels for Felicia when he meets her. It might even be argued that this leads to his downfall,

‘Master Arthur’ wishes to disappear because of the financial disgrace in which he has been (falsely) implicated. He escapes to a remote island at the other side of the world and disappears into a life of drugs which leads to his death.

And Renouard too finally disappears. Conrad uses the age-old device of his clothes left on the sea shore. He may have commited a suicide of sorts, or he may have simply removed all traces of his existence and moved on somewhere else. Either way – he has disappeared from the narrative.

The Planter of Malata – study resources

The Planter of Malata – CreateSpace – Amazon US

The Planter of Malata – Kindle eBook

The Planter of Malata – eBook versions at Project Gutenberg

The Planter of Malata – plot summary

Part I.   After five years of exploration and adventure Jeffrey Renouard has settled in seclusion on the island of Malata with an assistant, and has recently been granted the silk farming concession. In conversation with his friend a newspaper editor in the colonial city (Singapore?) Renouard reports having been invited to a dinner party, where he met Felicia Moorsom and was very struck by her attractiveness and her interest in his own background. Renouard lives in isolation and is not used to socialising.

Part II.   The editor reveals to Renouard that the Moorsoms are staying in the city incognito. He advises him to let Professor Moorsom into the profitable silk farming business. The Moorsoms have come in search of a man who was engaged to Felicia for a year, but who became involved in a financial scandal and pulled out of the engagement. A subsequent but separate scandal has however revealed his innocence. Felicia wishes to reclaim him, but he cannot be found anywhere. The editor has been asked to join in the search. Renouard goes back to his ship and realises that he has been powerfully affected by the girl.

Part III.   Next day the editor reports to Renouard that he has met the Moorsoms at dinner, and that the search for the missing fiancé ‘Master Arthur’ has begun in earnest. That afternoon Renouard visits the Moorsoms and once again is stongly affected by Felicia. He hopes the search for Arthur will last a long time.

Part IV.   That night Renouard has a vivid dream of searching in palaces and finding a marble bust which turns out to be Felicia’s head. He then interprets his own dream, after which he becomes a regular visitor to the Moorsoms. He admits to himself that he is desperately in love with a woman who is searching for another man. He has to exercise great self-control to conceal his passionate feelings for her.

Part V.   Professor Moorsom reveals to Renouard his strong reservations about Arthur, and his wish to move on to pursue his business engagements. He even doubts his own daughter and her judgements. He asks Renouard to help him by pouring cold water on her plans, and he invites him back to dinner that night.

Part VI.   Although he contemplates running away, Renouard attends the dinner. Professor Moorsom again asks him to discourage Felicia in her quest. Renouard makes a very feeble attempt, but she proves immovable in her resolve. She also confirms that no messages have arrived in England from the colonial city.

Part VII.   Suddenly the editor arrives with the news that Arthur has been found. A message from England reveals that all correspondence has been with a Mr Walter: he is Renouard’s assistant Walter on the island. Renouard rushes back to his ship and destroys a letter addressed to Mr A Walter he has had in his possession. It is then revealed that the assistant is in fact dead on the island. Renouard knows that the Moorsoms will leave if he tells them, and he feels that he can now somehow replace Arthur.

Part VIII.   The whole party sail for Malata, where Renouard stays outside the reef overnight, before embarkation. During the night he swims ashore and instructs his servants to say that Arthur has gone off on a trip round the islands.

Part IX.   The party wait for Arthur to return. Renouard is nervous: he discusses ghosts with Professor Moorsom’s elderly siister Emma, and his servant Luiz is asked when Arthur is returning.

Part X.   Professor Moorsom hears that some plantation workers have seen ghosts: he wants to investigate the phenomenon further. Renouard goes on a walk onto the headland with Felicia. There she reveals her suspicions and challenges him directly about Arthur. He reveals that Arthur was a drug addict for whom he felt sorry, and who died by falling into a ravine. Felicia claims it was her ambition or her destiny to redeem him. Renouard makes a speech which is part homage, part criticism of her – then makes a feeble lunge at her, before declaring his abject love for her.

Part XI.   Renouard realises he has gone as far as possible. The party leave the island next day – the Professor grateful to Renouard, and Felicia critical of him. Renouard threatens to ‘haunt’ her ever afterwards. He then pays off his workers and sends them home.

Part XII.   A month later the editor is not satisfied with the explanatory stories that reach his office about Malata, so he takes a ship to visit the island in person. He discovers Renouard’s clothes on a beach, but no body is ever found.

The Planter of Malata – main characters