Moments of Being was written in July 1927 and first published in the American magazine Forum for January 1928. It was later reprinted in the collection of stories by Virginia Woolf entitled A Haunted House. It carries the sub-title (and sometimes alternative title) of ‘Slater’s Pins Have No Points’. 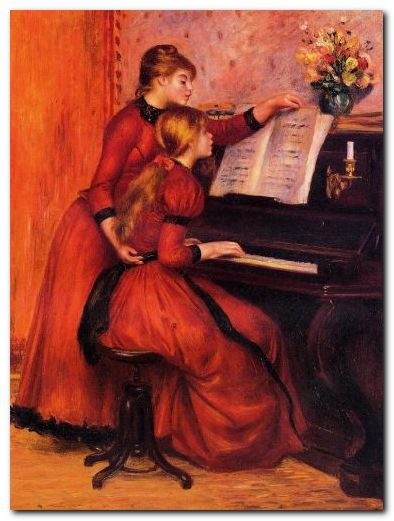 Moments of Being – critical commentary

There are two features which are of particular interest in this story. The first is the construction of a multi-tiered chronology or time scheme within the narrative. The second is the overt subject of the story.

Virginia Woolf was well under way in the experimental phase of her writing when she composed this story. Indeed, it was written, as she notes herself, as a spin-off from her work on To the Lighthouse: ‘side stories are sprouting in great variety as I wind this up: a book of characters; the whole string being pulled out from some simple sentence’.

As Fanny Wilmot constructs the life history of her piano teacher Julia Craye, the story weaves together strands of a narrative present, and two levels of the past. First we are offered a picture of Julia from Fanny’s point of view:

For she was not so much dressed as cased, like a beetle compactly in its sheath, blue in winter, green in summer. What need had she of pins — Julia Craye — who lived, it seemed, in the cool, glassy world of Bach fugues, playing to herself what she liked

Secondly, Fanny adds to her own impression an embellished version of information she has received from the college principal, Miss Kingston. This concerns Julia’s past life when growing up in Salisbury:

Oh they used to have such lovely things, when they lived at Salisbury and her brother was, of course, a very well-known man: a famous archeologist. It was a great privilege to stay with them, Miss Kingston said (‘My family had always known them — they were regular Salisbury people,’ Miss Kingston said)

But there is also a third more recent past expressed as the narrative includes the occasion of this information being transmitted to Fanny by Miss Kingston:

Miss Kingston, who gave little character sketches like this on the first day of term while she received cheques and wrote out receipts for them, smiled here.

This is a hallmark of Woolf’s style – to seamlessly weave together a variety of points of view, and of historical time frames, whilst at the same time blurring the distinctions between ‘facts’ and the imagination.

Virginia Woolf wrote a number of stories in which one character imagines or fantasizes about the life of another character: see An Unwritten Novel and The Lady in the Looking Glass for instance. In those two stories the person from whose point of view the story is (largely) told has their inventions confounded by some unexpected reversal at the end of the narrative. In the case of Moments of Being Fanny Wilmot’s fantasies seem to be confirmed. The story is offered as a positive epiphany.

Fanny imagines the circumstances that have led to Julia Craye becoming a spinster – and she gradually sees these decisions in a largely affirmative manner – preserving her right to an independent state of being. However, they are gained at the price of what is possibly a lonely and pinched life – ‘travelling frugally; counting the cost and measuring out of her tight shut purse the sum needed for this journey’. But the vision ends on a triumphant note nevertheless:

She saw Julia open her arms; saw her blaze; saw her kindle. Out of the night she burnt like a dead white star. Julia kissed her on the lips. Julia possessed her.

This embrace might seem rather surprising in its directness – but Woolf herself was in no doubt about the effect she wanted to produce, as she records:

Moments of Being – study resources

Moments of Being – principal characters

Moments of Being – story synopsis

Fanny Wilmot, a young woman, is having a piano lesson at a college with her teacher Julia Craye, a middle-aged spinster. Fanny speculates about Julia’s life, based on fragments of information she has picked up from the college principal, Miss Kingston, who is an old friend of the Craye family.

None of the Crayes have married, and Julia’s brother Julius – ‘the famous archeologist’ – is thought to be slightly odd, something which might also affect Julia.

Julia has mentioned to Fanny that men should ‘protect’ women – something that Fanny does not want. Julia also has memories of Kensington when it was a like a village. Fanny imagines Julia’s youthful days in Salisbury, being courted by young men from Oxford or Cambridge.

Then she pictures her with a man rowing on the Serpentine. He is just about to propose to her when she realises she must refuse him. She breaks the romantic mood between them, as a result of which he feels snubbed, and leaves her.

Even if these details were wrong, the important thing which remained true was her refusal, and her relief afterwards that she had retained the right to her independence. She has maintained her freedom because she has not got married, and she feels sorry for women who have sacrificed their liberty. She also feels that life is a constant battle against minor problems which might bring on headaches or chills. She regards a solitary trip to see the crocuses at Hampton Court as a major triumph.

Fanny wonders if Julia feels lonely, but suddenly has a positive vision of Julia’s life in all its historical richness and her making the most of limited resources – then Julia suddenly kisses her.

Moments of Being – further reading