Henri Gaudier-Brzeska (1891-1915) was one of the most dynamic and innovative sculptors of the modernist period. He was French, but produced his most important works in England in an incredibly short space of time – between 1911 and 1915. 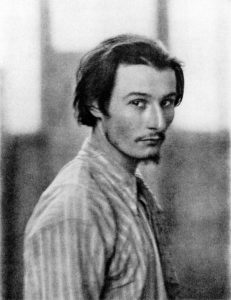 He was born Henri Gaudier near Orleans in France – a talented schoolboy who won scholarships that took him to London and University College, Bristol. He was supposed to be engaged with business studies, but spent his time sketching antiques in the Bristol Museum. After this he travelled to Nuremberg, Munich, then Paris, where he met Sophie Brzeska in a library.

This was a decisive turning point in his life. She was Polish, had literary aspirations, and was twice his age. They formed an immediate bond that was to last until the end of his tragically short life – and hers, since she died soon afterwards. Yet it was not a conventional romantic and sexual attachment – more of a mother and son relationship..

They were both in ill health and desperately poor. However, when they travelled into the countryside as an economy measure, even the innocent visits of a young single man to an unmarried woman staying in a rented house were enough to enrage the prurient provincial farmers, who called in the police.

Gaudier became eligible for military service, but passionately wished to avoid it. He described the French as ‘slaughterers of the Arabs’. So they moved to London. At this point they unofficially joined their surnames to form the compound Gaudier-Brzeska as a sign of their commitment to each other.

They plunged into further poverty and ill health. He made a pittance at various menial office jobs. She paid for his visits to prostitutes at five shillings a time – since they had been recommended by a doctor as conducive to his well-being.

She made efforts to establish an independent existence by seeking work, and he started to learn Polish. He was sketching whenever he had the chance, but amazingly he had still produced no sculptures, even though he only had a few years left to live. When Sophie found temporary work as a governess in Felixstowe he wrote enormously long letters (addressed to ‘Adorable Maman’) explaining his ideas about art and reproaching her for having different opinions.

In 1911 they set up home together in Chelsea. She bought a bug-infested bed: he slept in a deck chair. There is conflicting evidence about the exact nature of their relationship. She claimed they were like brother and sister: he claimed they were not. But he also confessed that he often lied.

Henri wrote to the author of an article in the English Review which led to his selling some of his posters. He also began to model in clay and secured his first poorly paid commissions. He was also introduced to Katherine Mansfield and John Middleton Murry, both of whom were rather irritated by Sophie. Henri contributed sketches to their magazine Rhythm but the relationship eventually foundered on incompatible personalities. 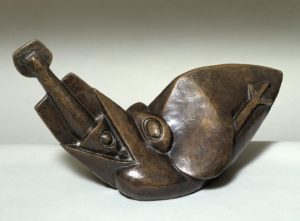 When Sophie went to work in Bromsgrove it gave him more free time for his art work, but they also spent a lot of time having lovers’ tiffs via letter. He worked on paintings, drawings, plaster busts, and a scheme for producing painted tiles. All of this was what we would now call cottage industry, and the most he was ever paid for a single work was twenty pounds.

It is interesting to note that his most successful commissions around that time were for portrait plaster busts. His fellow immigrant Jacob Epstein was doing the same thing at the same time – and the two men did eventually meet. At one point he was even touting for the job of making decorative mascots on motor car radiators.

In 1913 he established himself in a leaky and cold artist’s studio in the Fulham Road and started working with stone blocks. He made friendships with Frank Harris (author of the notorious My Life and Loves, and Wyndham Lewis, with whose coterie he founded the Vorticist movement.

Living the full Bohemian life in London, it is not surprising that he eventually met Nina Hamnett, who introduced him to Roger Fry. He also sold two statues to Ezra Pound. Yet despite these early signs of success, it was Sophie’s personal savings that that put a roof over their heads and food on the table.

In 1914 when war broke out he rather surprisingly returned to France, where he was immediately jailed for twenty years as a deserter. He managed to escape and return to London. Yet later he went back to France again, serving on the front line, where he was promoted to corporal and then sergeant in recognition of his bravery. In 1915 he was killed during an attack on Neuville Saint Vaast. He was just twenty-four years old.

Henri Gaudier-Brzeska biography – But the book at Amazon UK

Henri Gaudier-Brzeska biography – Buy the book at Amazon US