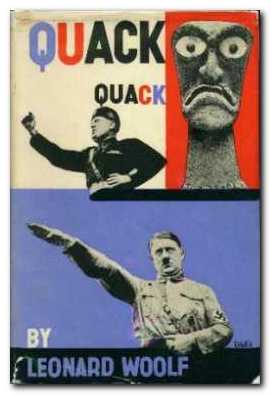 “In his next two Hogarth Press books after the disappointment of After the Deluge (1931), Leonard Woolf published what he thought about Mussolini and his Fascist ambitions in Quack, Quack! (1935) and The League and Abyssinia (1936). The title of Quack, Quack! suggests the barnyard sounds of the orating Hitler and MUssolini. With devastating effect, Woolf matched photographs of the eye-bulging Hawaiian war god Kukailimoku to those of the gesticulating bellicose dictators. Woolf’s two-hundred page attack on fascism concentrated on the savage quackery of modern totalitarianism but also discussed the intellectual sources he found in Carlyle, Nietzsche, and Spengler. Woolf’s list of heroes who battled against the totalitarians for the light of civilization began with Erasmus and Montaigne and included Thomas More, Giordano Bruno, Spinoza, Descartes, Voltaire, Rousseau, Kant, and Goethe.”

The striking, boldly-coloured dust jacket for this book was designed by E.McKnight Kauffer. A cheap edition of the book was published in 1936, priced at 2s.6d; it was reprinted again in 1937.