This is the second edition of a very successful book which covers all aspects of scriptwriting (or script writing) and making a living as a professional author. It’s the work of a leading literary agent who brings insider tips and guidance on what is a tough market in which to make a living. Julian Friedmann takes a practical, no-nonsense approach which encourages would-be authors to become more aware of what he calls the ‘politics’ of writing. This means paying more attention to the market place; being prepared to fit in to the system of television or screen, and being prepared to deliver to audiences what they want.

He paints a picture of a very difficult business which makes big demands of the would-be screenwriter. The only way to succeed is be prepared to collaborate; drop your ego; know that viewer-ratings is All; and ‘murder your darlings’ when required.

There are excellent chapters on how to structure and produce a ‘pitch’, a ‘treatment’ and a ‘step outline’ for a proposed script. But even if you’re good at doing all that, there’s still more to learn: how script editing and script reports work; what ratings, audience share, and programme research mean; how to deal with an agent – or without one; how to handle meetings and negotiate with producers; how to understand a basic agreement and protect your own interests as a writer; and how to survive financially whilst you are waiting for that call from Hollywood.

The emphasis is almost entirely on cinema and television. There’s no mention of the theatre, and radio only gets a very brief mention, although there is one chapter on writing for interactive multi-media.

There’s also no advice on the details of writing techniques: he assumes you know how to write, or can find out elsewhere. His guidance is on how to make a success of scriptwriting from a business point of view. There are full explanations of all the people you need to contact; how to make your work look professional; and how to take rejection without losing heart.

He ends with a very useful series of appendices with includes examples of negotiations with producers; sample memos commissioning a deal; legal contracts; Writers’ Guild minimum Terms of Payment; plus all the contact details for writer’s groups, training courses, and professional associations.

Anyone entering this ferociously competitive field of creative writing needs all the help they can get. Friedmann explains why it is such a tough business, and in doing so he reveals the strategies you need to succeed. You will find advice on writing skills elsewhere. This is insider guidance on how the business works.

interviews with successful writers for television

Writing for television and writing for the cinema are no longer the same thing. New systems of network and cable scheduling have produced what are called ‘long-form television narratives’. These are programmes that run for thirteen (or more) episodes. Each programme is a single whole story – but it is split into separate self-contained units, each one of which will have its own story ‘arc’. That is, each episode is a drama in itself, with a beginning, middle, and end. As one successful screenwriter observes:

The best of television is like a novel. You have episodes like chapters, you can grow the characters, and there is scope to the stories 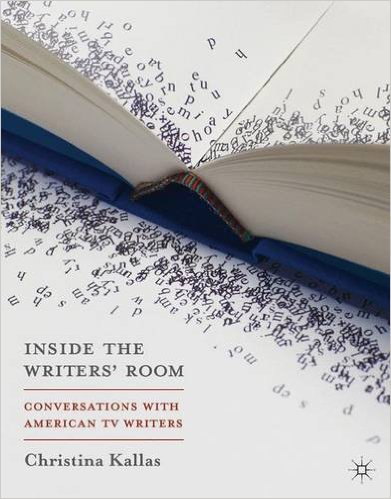 The interviews in this fascinating collection are with professional American television writers, but the practices they describe spill into British and even pan-European enterprises – all driven by very similar commercial imperatives. The majority of programmes (‘shows’ in US parlance) produced in these new formats are written by teams working in what’s called a ‘writers’ room’ – a group of scriptwriters working under the direction of a ‘showrunner’ – someone who decides on the look and feel of the finished programme.

The writers discuss all the major recent successful programmes – Sex and the City, Sopranos, The Wire, Breaking Bad, Mad Men, and Boardwalk Empire, and if some of the shows are not so well known you can watch them on YouTube, as I did Tina Fey’s hit 30Rock.

The strength of these new TV formats is that they are exploring new methods of delivery for fiction via visual presentation. They also provide scope for the development of character in considerable depth, in the same way as is common in good novels. The weakness is that some of these ‘shows’ are not much more than soap operas or vehicles for quick-fire quips (see Two Broke Girls).

One other feature worth observing is that many of these programs present the lives of young people who are preoccupied with ‘dating’, flat-sharing, friendships, and lifestyle choices that are the concerns of normal people in their early twenties. But they are acted on screen by people in their 40s and 50s. This presents a credibility challenge to any critical viewer – and strangely enough the phenomenon is so widespread it is almost undetectable, having become the norm.

This studio and writers’ room format has some bizarre and counter-intuitive ‘unwritten rules’. One is that ‘wives don’t cheat’, another is ‘no crime in the ghetto’. In other words, any leading married female character must not be depicted committing adultery – though it is perfectly acceptable for her husband to do so. And even though statistics show that the majority of crimes committed by ethnic minorities (for which, read African-Americans) are against people from the same ethnic group, the studios think that ratings will be lost if such scenes are written into episodes.

The interviews reveal differences in practice between studios in New York and in Los Angeles. Almost all the original writing goes on in California – but an increasing number of shows are actually filmed in New York, because the state offers tax breaks for works shot within its boundaries.

The writers have several things in common – the most notable being that none of them want to work in the cinema. A writer can invest time and creative effort in generating a script, but feature-length films are so colossally expensive to produce, many of them end up not being made at all. One of the interviewees bemoans the fact that a feature film script she has written and had accepted was still being sent back for re-writing after four years. These television writers prefer the faster-paced world and more immediate results of Network and cable television.

The rewards can be enormous – with salaries rising to (Writers Guild minimum) $3,500 per week. But be prepared to work long hours. These people are working under immense pressure to write, edit, produce, and film for thirteen episodes per season, working with co-writers, showrunners, actors, and technicians. Eighty hour weeks are considered normal. And if this all seems very USA-centric, take heart. These well-paid writers have enormous respect for English productions such as The Office, Downton Abbey, and Broadchurch.

And if all this seems way beyond the reach of some aspiring script-writer trapped in a suburban box room without even the fare to travel to Los Angeles, there is a very encouraging chapter on writing for Web TV. Susan Miller outlines the whole process of creating short films using hand-held video cameras and editing the results into a series that runs on the Internet. Have a look at Anyone But Me and The L Word to see examples.