original founder-member of the Bloomsbury Group

Julian Thoby Stephen was born in 1880, the elder son of Leslie Stephen and his wife Julia. His younger brother Adrian Stephen (b. 1883) became a psychoanalyst; his elder sister was the artist Vanessa Bell (b. 1879), and his younger sister was the novelist Virginia Woolf (b. 1882). 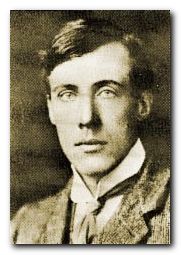 Because his mother had previously been married to the publisher Herbert Duckworth, Thoby had as half brothers George and Gerald Duckworth, both of whom were part of the large family that lived at Hyde Park Gate in Kensington.

His education began at Evelyn’s, a preparatory school. After failing to gain a place at Eton, he was sent to Clifton College in Bristol, which unlike most other public schools at the time placed an emphasis on science in its curriculum and was less concerned than most with social elitism. He studied Latin and classics, and from there he won an exhibition to Trinity College Cambridge.

At Cambridge he met Lytton Strachey and was considered for but not elected to the quasi-secret debating group called the Apostles whose other members around the same time included John Maynard Keynes and Leonard Woolf. Strachey fell in love with Thoby, attracted to his good looks, stature and masculine physicality: he nicknamed him ‘The Goth’.

When their father Sir Leslie died in 1904, the family house was sold and Thoby moved with his brother Adrian and two sisters to set up home in Gordon Square in Bloomsbury. They had found the Victorian atmosphere of Hyde Park Gate very oppressive, and moving to a district of London which at that time was not at all fashionable gave them a sense of slightly risque bohemianism.

Thoby invited some of his old Cambridge friends, along with writers E.M.Forster, Clive Bell and David Garnett, plus artist Duncan Grant, to a Thursday evening discussion group – which was effectively the birth of what came to be known (later) as The Bloomsbury Group. Leon Edel captures the impression he made on those around him in his psycho-analytic study Bloomsbury: A House of Lions

He was a solid male presence. Lytton said that Thoby was ‘hewn out of living rock’. His character was ‘as splendid as his appearance, and as wonderfully complete’. Leonard, half a century later, said that Thoby ‘had greater personal charm than anyone I have ever known. Thoby was loved alike by the Cambridge intellectuals and the hedonists. He shared with Clive Bell a delight in the out-of-doors—hunting, bird-watching, riding, walking, fishing. Thoby shared with Leonard a lively interest in politics, in philosophy—always with that poise and detachment out of which large figures are made. He shared with Vanessa a delight in form and colour and was himself a excellent draughtsman.

The next few years of his short life are rather a mystery – something his sister Virginia made into the central feature of her first great experimental novel, Jacob’s Room. The story is a ‘portrait’ of her brother – a composite of how he is perceived differently by the various people in his life

Thoby was called to the Bar at the Inner Temple in 1906, but later the same year he contracted typhoid whilst on holiday in Greece, dying shortly afterwards. His ashes were scattered on his mother’s grave in Highgate Cemetery.