academic essays on Woolf and her major novels

For those who may not know, MFS is not some sort of DIY building material, but Modern Fiction Studies, a prestigious academic journal, and Virginia Woolf an MFS reader is a compilation of essays on Virginia Woolf drawn from its archives going back over the last half century of its publication. The chapters are arranged in three thematic sections, each arranged chronologically according to the text under consideration. 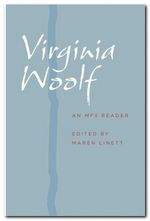 It’s a book written by university teachers, designed to be read and (they hope) quoted by other teachers in the books that they write as part of seeking career promotion. That’s the nature of academic life today. In some instances it produces valuable results: for the main part it results in worthless dross. This system is the root of both the main strength and the weakness of this book.

Brenda Silvers’ introductory essay huffs and puffs about the adoption of Virginia Woolf into popular culture – but it’s mainly hot under the collar about Edward Albee’s play (Who’s Afraid..) and its possibly disguised gay theme. She also goes in for some quite bogus generalizing on the interpretation of photographs:

That will be news to the many people who buy and admire her portrait wherever it is on sale.

Susan Friedman offers an account of The Voyage Out which sees Rachel Vinrace as an example of Woolf’s ‘Common Reader’ – someone unprejudiced by formal academic experience and unburdened by the authority of criticism. This is quite a useful way of matching Wool’s theory with her fiction.

Charles Hoffmann traces the development of Mrs Dalloway from a short story (Mrs Dalloway in Bond Street) to a full length novel following the connections between notebooks, manuscripts, and drafts which are scattered in various collections on both sides of the Atlantic. This is an approach to literary scholarship which has the advantage of being unencumbered by lots of ‘theory’ and is rooted in the practicality of literary texts.

Tammy Clewell has a thoughtful piece on death, mourning, and grief in Jacob’s Room and Mrs Dalloway. This argues with persuasive supporting evidence that Woolf was promoting more radical views on these topics than is commonly supposed. She does not want her readers to relax any opposition to the barbarous mass slaughter behind every war memorial and slogans such as ‘their names shall live forever’:

In relation to these postwar forms of memorialization, Jacob’s Room stands out precisely for what it withholds: the text offers no faith in religious immortality, no applause for individual heroism, no celebration of male comradery, no stoical acceptance of fate, no aesthetic smoothing over of the war’s human cost of any kind.

The best-written essay in the collection (and unsurprisingly the most frequently quoted by others) is Karen deMeester’s on ‘Trauma and Recovery in Mrs Dalloway‘. This argues that Woolf gives accurate expression to the condition of psychological trauma – particularly of course in the case of Septimus Warren Smith, who has seen through the horrors upon which his society is based. But even more bravely, deMeester argues that Clarissa Dalloway is a social coward, because although she sees the same truths as Septimus, she chooses to re-unite with the world which has caused the horrors in the first place. As Peter Walsh says of her:

she frittered her time away, lunching, dining, giving these incessant parties of hers, talking nonsense, saying things she didn’t mean, blunting the edge of her mind, losing her discrimination

It’s not often one sees Peter Walsh (a lightweight figure) quoted with such approval. But he has a point – and so does deMeester.

Urmila Seehagiri desperately wants to offer a racial and post-colonial reading of Woolf’s work, and she digs and digs, hoping to come up with some suitable material. To the Lighthouse yields the fact that Lily Briscoe has ‘little Chinese eyes’; Woolf took part in the Dreadnought Hoax and attended the Ballets Russes. No distinction is made between fictional and biographical evidence. When To the Lighthouse is addressed in detail, broken teacups are the signal for an extended account of the history of the tea trade with India and China. Then, via a detour into the theories of art held by Roger Fry and Clive Bell, she concludes that Lily Briscoe’s ‘little Chinese eyes’

attain the ‘ultra-primitive directness of vision’ that Fry attributes to East Asian cultures, and her arrangement of forms is liberating because it is autotelic. Privileging the completion of Lily’s painting over mending broken familial structures, Woolf creates a racially differentiated model for modern English subjectivity that holds itself separate from patriarchal and imperialist hierarchies.

Many of the other essays suffer from this very dubious critical method. A single word or short phrase is seized upon; a tenuous connection with another text (fiction, biography, or theory) is made; and a literary critic’s comment upon some apparently similar phenomenon is noted. The flaw is that a logical and positive connection between the starting and finishing point is taken for granted without any critical examination or supporting evidence. The connections between these elements are at best loose, and more often mere fugitive verbal associations.

And that, I’m afraid, is the state of literary criticism in the university today. Some good solid textual scholarship, holding out against a tide of convoluted windbaggery masquerading as ‘critical theory’. Can you understand the last quote above?