Bloomsbury Women is a beautifully illustrated and well-designed book. It features paintings, photographs, woodcuts, and biographical sketches of all the principal female characters in the Bloomsbury Group. Jan Marsh starts with an account of how the phenomenon that is ‘Bloomsbury’ came into being – a story that is now quite well known. But she puts more than usual emphasis on the female members of the group. 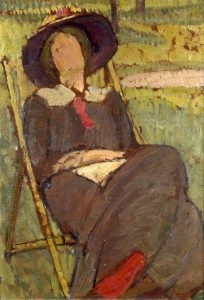 Virginia Woolf in a deckchair

There are any number of outstanding characters discussed – Dora Carrington, Nina Hamnett, Ottoline Morrell, and Katherine Mansfield – but the figure dominating her entire account is Vanessa Bell. Perhaps rightly so in the sense that she was both a reasonably successful artist, a powerful matriarchal figure, and someone who was connected to so many other members of the group.

She was the elder sister of Virginia Woolf, and was artistically successful as a painter in her own right. She was married to the critic Clive Bell; and she lived most of her adult life with fellow artist Duncan Grant. The painter and art theorist Roger Fry was also briefly one of her lovers. And she managed to keep them all friendly with each other.

There’s very little here that isn’t already well known to experienced Bloomsbury followers, but the biographical sketches are well woven together. There are also some excellent anecdotal gems which illustrate the culture of a bygone age, such as the advice Molly MacCarthy was given by her mother for facing life:

In all disagreeable circumstances, remember three things. I am an Englishwoman. I was born in wedlock. I am on dry land.

It was not surprising that following her engagement, Molly (daughter of the Eton Provost) suffered a nervous breakdown brought on by her fear of the ‘unknown’ (sex) – something she more or less shared with Virginia Woolf.

Jan Marsh is particularly good at explaining the new painting techniques being explored. She uses as illustrative examples pictures that are actually reproduced in the book – which creates a successful merging of visual presentation and textual analysis that is often absent in studies of this kind.

There’s a fascinating comparison of representation via written narrative and graphic illustration – writing and painting. She argues (persuasively) that Virginia Woolf’s experimental fictions were a form of post-Impressionism in prose

He discussion of the Omega Workshops reminds us how talented (if capricious) the younger Nina Hamnett was at this period, and there are excellent illustrations of her work to prove it.

The narrative is also structured around places – Garsington Manor, Charleston, Tidmarsh, Ham Spray, as well as the many Squares in the Bloomsbury district of London where many of them had town houses.

She ends on rather a downbeat note with a roll call of deaths. First there is Lytton Strachey, followed immediately by the suicide of Dora Carrington. Then comes Julian Bell, killed in the Spanish Civil War, Roger Fry, and finally, seemingly bringing this epoch to an end, Virginia Woolf’s suicide in 1941.

But the overall message of the study is far from pessimistic. It is a celebration of writers and artists exploring new possibilities in their work and the personal relationships they formed with each other.

Bloomsbury Women – But the book at Amazon UK

Bloomsbury Women – Buy the book at Amazon US