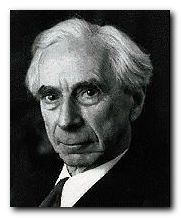 Bertrand Russell (1872-1970) was an unusual mixture of a popular and an academic philosopher. He was the inventor of The Theory of Descriptions. Like many philosophers he made his major contributions whilst quite young with The Principles of Mathematics (1903) and he followed this later with The Analysis of Mind (1921) and An Enquiry into Meaning and Truth (1940).

He was born the grandson of Lord John Russell, who had twice served as Prime Minister under Queen Victoria. Educated at first privately, and later at Trinity College, Cambridge. In 1894 he obtained first class degrees both in mathematics and in the moral sciences. The same year he got married to Alys Pearsall Smith, an American Quaker, who was the first of his four wives.

Like many others of his generation who attended Cambridge he was influenced by G.E. Moore and his Principia Ethica (1903) which propounded the principals of ‘the pleasures of human intercourse and the enjoyment of beautiful objects’ which inspired many of the Bloomsbury Group.

In 1904 he went to teach at Harvard, where T.S.Eliot became one of his students. Their paths continued to run in close parallel when both became members of the Bloomsbury Group – and closer still when Russell started an affair with Eliot’s new wife Vivienne.

He was a regular visitor at Garsington, the country estate of Lady Ottoline Morrell with whom he had a long affair. [Mischievous commentators point out that she only had two baths a year, and he suffered from halitosis.] It was there that he also met D.H.Lawrence with whom he had a fairly virulent falling out. Their spat over existential matters led Russell to contemplating suicide. The same combination of attraction and male rivalry also affected his relationship with one of his star pupils, Ludwig Wittgenstein. In 1921 he divorced and married for the second time to Dora Black, with whom he set up a progressive school.

Later in life he wrote a series of popular books which were essays and reflections on topics such as liberty, freedom, censorship. Most of his popular writing is humane, stylish, and easy to read. Many modern attitudes we now take for granted – tolerance, liberal humanism, questioning of authority – were first articulated in collections such as The Conquest of Happiness, In Praise of Idleness, and Why I Am Not a Christian.

During the late 1920s and early 1930s, as his marriage to Dora broke down and as he lost faith in Beacon Hill, Russell continued to write books intended to emancipate readers from what he saw as the fetters of outmoded religious belief, restrictive marriages, repressed attitudes towards human sexuality, and authoritarian education practices.

In 1936 he married for the third time to Patricia (Peter) Helen Spence. While teaching in the United States in the late 1930s, Russell was offered a teaching appointment at City College, New York. The appointment was revoked following a large number of public protests and a judicial decision which stated that he was morally unfit to teach at the College.

Along with George Orwell, Russell was one of the few Western intellectuals on the Left not to be seduced by the claims of Marxist theory and Bolshevik practice in Russia. He retained his beliefs in non-violent resistance to wars until the aggressive expansionism of Hitler in Poland in 1939 compelled him to abandon his peace advocacy. He spent the Second World War in America where he wrote his most popular work, History of Western Philosophy.

He was awarded the Nobel prize for literature in 1950, divorced Peter Spence in 1952 and married for the fourth time to Edith Finch. In the 1960s he also embraced the cause of nuclear disarmament and was a prominent member of the Campaign for Nuclear Disarmament (CND). He died of influenza at his home in Merioneth, Wales in 1970.

As Ray Monk’s excellent biography of Russell makes clear, although he was elected to the Royal Society in 1908, Russell’s teaching career at Cambridge appeared to come to an end in 1916 when he was dismissed from Trinity College because of a conviction for anti-war activities. Two years later he was convicted again. This time he spent six months in prison. It was while in prison that he wrote his well-received Introduction to Mathematical Philosophy (1919).

The Bloomsbury Group is a name given to a loose collection of writers, artists, and intellectuals who came together during the period 1905-06 at the home of Virginia Woolf and her sister Vanessa Bell. Following the death of their father, Sir Leslie Stephen, they set up home in Gordon Square, Bloomsbury, in central London, close to the British Museum.

The Bloomsbury Group is a short but charming book which explores the impact of Bloomsbury personalities on each other, plus how they shaped the development of British modernism. It’s actually the illustrated catalogue of an exhibition at the National Portrait Gallery. But most of all it’s a delightful collection of portrait paintings and photographs, with biographical notes. It has an introductory essay which outlines the development of Bloomsbury, followed by a series of portraits and the biographical sketches of the major figures.

Toby invited his friends to soirees, and Vanessa invited hers. The two groups met, networked, formed liaisons with each other (that’s putting it mildly) and created some of the central works of the modernist movement in Britain in the period 1905-1930.

They were in conscious revolt against the artistic, social, and sexual restrictions of the Victorian age. They were on the whole from an upper middle class intellectual elite, but it has to be said that in their personal lives they defied the status quo, and most of them were very productive.

In fact, the true centre of the group was Cambridge University, where their brother Toby had met a number of intellectuals who had come under the influence of G.M. Moore, whose Principia Ethica (1903) had made a serious impression on undergraduates who formed a group called the ‘Apostles’. He propounded a notion of ethics which rested on the pursuit of friendship, happiness, and the cultivation of the intellect.

Influenced by this notion of free-spirited friendship, intellectual liberty, and radical life-styles, many of the men were conscientious objectors during the First World War. They were liberals or socialists at a time when the English establishment was overwhelmingly conservative; and in their personal relationships they pushed back the boundaries of what could be done in a way which was not seen again until the 1960s.

Many of these people became sexually involved with each other in a way which even now seems quite bewildering. Married to one person, but in cahoots with someone else, often of the same sex. Some of them even lived with a person of the opposite sex yet shared the same lover.

It has to be remembered that at that time homosexuality was a criminal offence (though only for men) and many gay men got married as a legal cover and a smokescreen to provide social legitimacy.

Among the Bohemians: Experiments in Living 1900—1930 was written by Virginia Nicholson, Quentin Bell’s daughter and grand-daughter of Vanessa Bell, who was Virginia Woolf’s sister. Bloomsbury lies at the heart of the book in its portraits of Ralph Partridge, Virginia Woolf, Duncan Grant, Lytton Strachey, Dora Carrington, and Katherine Mansfield, plus peripheral figures such as Arthur Ransome, Rupert Brooke, Augustus John, Nina Hamnett, and Dylan and Caitlin Thomas. Very amusing, well written, and every page dense with top class gossip and anecdotes. She looks at their tangled love lives naturally, but also their radical ideas on money (and poverty) food, dress, and even child-raising. Highly recommended.

The intellectual connections between these people were amazing. For instance, the Woolfs established the Hogarth Press in their own home as a hobby-cum-therapy to help Virginia through her periods of depression and madness. The Press published not only her own works, but books by T.S.Eliot, Vita Sackville-West, and Christopher Isherwood. They even pioneered the work of Sigmund Freud, whose writing was translated by James Strachey, Lytton Strachey’s brother.

It also has to be said that many of the group were enormously productive and high-achievers. Despite her periods of mental illness, Virginia Woolf was a voluminous diarist and letter writer – as was her husband Leonard Woolf. Together they also ran the Hogarth Press. Economist John Maynard Keynes produced an almost unbroken stream of influential political studies and policy documents whilst working in a number of high-ranking government positions. And Vita Sackville-West was a best-selling novelist and award-winning poet who also wrote books on historic houses and gardens.

A Bloomsbury Canvas is a selection of essays on the Bloomsbury Group. Essayists include Hermione Lee, biographer of Virginia Woolf; art historians Richard Shone and Frances Spalding; Nigel Nicolson, author of Portrait of a Marriage, a study of his parents, Vita Sackville-West and Harold Nicolson; and the last survivors of those closely connected to the Bloomsbury Group – Frances Partridge, Quentin Bell and Angelica Garnett. The text is illustrated with many previously unpublished works.