Adrian Stephen was born in 1883, the younger son of biographer Leslie Stephen and his wife Julia. His elder brother Thoby Stephen (b. 1880) died of typhoid in 1906, His elder sister was the artist Vanessa Bell (b. 1879), and his younger sister was the novelist Virginia Woolf (b. 1882). 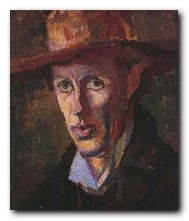 His mother was the niece of the Victorian photographer Julia Margaret Cameron, and she had previously been married to the publisher Herbert Duckworth, As a consequence Adrian had as half brothers George and Gerald Duckworth, both of whom were part of the large family that lived at Hyde Park Gate in Kensington. His father had also been married before – to the daughter of William Makepeace Thackery.

Adrian was thought to be the particular favourite of his mother, and he was very distressed when she died suddenly in 1895 following an attack of influenza. He was very much the baby of the family, and felt overshadowed by his charismatic elder brother. Even when he suddenly grew to become six feet five inches tall in his teens, he developed a chacteristic stoop, as if he could not cope with his height.

He was educated at Westminster, the famous public school attached to Westminster Abbey in the centre of London. From there he went on to Trinity College Cambridge, and like his brother began to train to be a lawyer. But he gave this up, hoping to become an actor instead.

When their father Sir Leslie died in 1904, the old Victorian family house in Kensington was sold and the Stephen children moved to Gordon Square in Bloomsbury, which at that time was considered a distinctly unfashionable part of London. The four Stephen siblings enjoyed living a slightly bohemian life, and Adrian had the advantage of meeting the celebrated friends of his elder bother who were invited to discuss art, literature, and philosophy on Thursday evenings.

He met E.M.Forster, Clive Bell (who married his sister Vanessa) and David Garnett, plus the artist Duncan Grant. Among other visitors were the philosopher Bertrand Russell, the economist John Maynard Keynes, and Leonard Woolf, who married his other sister Virginia. This was the collection of friends which eventually became known as the Bloomsbury Group.

In 1910 Adrian took part in what became known as the ‘Dreadnought Hoax’. A group of people that included Adrian and his sister Virginia dressed up in Arab clothes and passed themselves off as a party of royal Abyssinian visitors making an inspection on board the warship HMS Dreadnought. Adrian acted as ‘interpreter’ to the group, who spoke to their hosts in a gibberish mixture of Latin and Greek.

When the prank was uncovered, there was a scandal and calls were made for the ringleaders to be arrested – but it was discovered that they had not broken any law. It is an interesting footnote to history that one invented phrase they used to express vigorous approval of the military equipment they were shown was “Bunga! Bunga!” – which became popular thereafter.

In 1909 Adrian began an affair with Duncan Grant, who was Lytton Strachey‘s cousin, but shortly before the first world war he married Karin Costelloe, a philosophy graduate from Newnham College, Cambridge. As conscientious objectors, they spent the war years working on a dairy farm.

They were friends via the Bloomsbury Group with another branch of the Strachey family – James Strachey and his wife Alix, who were the first translators of Freud into the English language, and the first professionally qualified and practising psychoanalysts in Britain. This enthusiasm rubbed off onto Adrian and Karin, and after the war they both decided to become analysts, an ambition fulfilled for Adrian in 1926 after completing a medical degree.

Like other members of the Bloomsbury Group, Adrian had been a pacifist during the first world war, but sickened by the brutality of the Germans during the second, he changed his stance and volunteered for medical service. He served actively as an army doctor at the age of sixty. He died in 1948, after which his wife committed suicide.

More on biography
More on the Bloomsbury Group

James Strachey was the younger brother of Lytton Strachey and one of the first people in England to train in and practise psychoanalysis. He translated Freud’s work, and as a member of the Bloomsbury Group was instrumental in promoting it via publications with the Hogarth Press. The Letters of James and Alix Strachey is a record of the almost daily correspondence he exchanged with his wife Alix whilst she was being psychoanalysed as part of her training by Karl Abraham in Berlin. 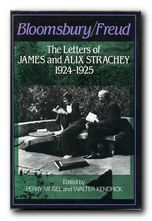 It’s an interesting one-year slice of two lives which encompasses social and cultural life in Germany and the UK in the early 1920s, the foundations of Freudianism in the UK, and a rich tapestry of European modernism from two of its inside practitioners who were very keen to be au fait with the latest cultural and intellectual developments. The letters are prefaced by an introductory essay which places psychoanalysis in a historical context and explains James and Alix Strachey’s position in the Bloomsbury group – into which they both fitted well, both in terms of their unorthodox sexual proclivities and their intellectual achievements.

James’s letters are rich in Bloomsbury gossip and title-tattle as he entertains Alix whilst she endures the dire north German food in Pension Bismark:

Adrian [Stephen] is said now to be in the most awful condition & threatens to shoot himself. Karin will remain until he gets through his final exam… If he shoots himself in our sitting-room it’ll not only spoil the carpet but also damage our professional careers—so I suppose I shall have to avert it. —Loppy & Maynard are still said to be on the point of marriage. The divorce is expected to be consummated in October.

Alix reports to him from deep within the psychoanalytic pressure cooker which was Berlin in the 1920s, providing interesting details on all the rival camps and splits which went on between Freud, Adler, Jung, Rank, and Reich.

From a scientific point of view it’s interesting to note that both of them, whilst eagerly pioneering psychoanalysis as practitioners, freely admit to each other that they don’t understand it all, and they see much quackery in their now-famous contemporaries.

There are plenty of opinions ventilated which even for 1924 are politically incorrect to a degree which might surprise today’s Bloomsbury enthusiasts. Alix writes to James on a political contretemps with Egypt: “its a pity all blacks (including the Irish) can’t be gently sunk in the bottom of the sea. For what good are they on earth.” And she is just as forthright when replying to an enquiry from him about their romantic separation: “If & when I come back bursting with vaginal libido, I’ll keep myself going with candles & bananas … if that is partly what is on your mind.”

Within a few years of her being there, the whole of the psychoanalytic movement had broken up in Germany, harassed by the rising Nationalists, and had dispersed to America and the UK. James and Alix continued to work as practising analysts, translating major works, and taking a major role in promoting The Standard Edition of Freud’s works. This volume concludes with a fascinating account this long and complex process – as well as addressing the criticisms of hasty and flawed translations which continue to surround the works.

This volume provides both an interesting insight into a corner of Bloomsbury which is not so welll known, and at the same time a fascinating glimpse into European culture at what turned out to be a critical period.