How can the Internet help authors today? Isn’t writing still just a matter of putting pen to paper? There are so many new developments in electronic publishing, free web space, media mergers, and online bookshops: won’t these take our attention away from being creative? Well yes, they might. But they also open up exciting new possibilities. That’s why Jane Dorner has written The Internet: A Writer’s Guide – as a road map through the maze.

She starts from the most logical point – how to get connected, what equipment you need, and how to operate the essentials. In the discussion of email she begins to consider the special needs of writers – how to send attachments; how to submit work to publishers; even how to conduct email interviews.

On the Web, she explains the techniques of efficient searching, how sites are used for publishing, and what to do when it all goes wrong.

She touches on writing groups which exist in the form of mailing lists, websites, newsletters, chat groups, and conferences. The strength of this approach is that given a little trial and error, most writers will be able to locate the sort of forum which suits them best.

There’s an interesting chapter on electronic publishing and what are now becoming known as e-book readers. This is very timely, as the market potential for this type of distribution has just opened up again with the success of products such as the 3″ X 5″ PalmPilot – the latest version of which can download Web pages and e-books off the Net, but still fit in your shirt pocket.

She then explores both the new opportunities for writers created by the Internet and the practicalities of publishing on your own web site. I was glad to see that she didn’t waste too much time with coding and page layout, all of which can be picked up easily elsewhere. She concentrates instead on issues of copyright, payments, encryption, plagiarism, and censorship. These topics will be far more live issues for the majority of writers tempted by the possibilities of online publication.

But by far the best part of the book – the ‘killer app’ so far as most writers will be concerned – is the final chapter listing online resources. She gives annotated lists of all the sources a writer could possibly wish for – from libraries to bookshops, dictionaries to writing circles, newspapers to writing style guides, electronic publishers to free Internet service providers. Just working your way through the list with your browser open would be an education in itself. The list has been enlarged for the second edition – and made available at the book’s website.

What I like about this guide is that it combines a lightness of touch with a thoroughness of approach. It gets straight to the point, uses a minimum of technical jargon, and covers a wide range of topics pertinent to aspiring authors. If you are a writer, and you’re ready to explore a rich source of suggestions for what to do next with the Net, then buy this book. You will not regret it.

Microsoft Manual of Style was produced in-house at Microsoft as the style guide for its army of writers who produce the help files and documentation for its products. Except that it’s been re-written for the public, and it’s completely non-prescriptive. They don’t say “This is the way it should be done”. They say “Here’s how we do it at Microsoft. You may find this approach useful”. It starts with a chapter describing the principles on which its house style is built – and these could profitably be adopted by any other organisation or business. Or any individual for that matter. 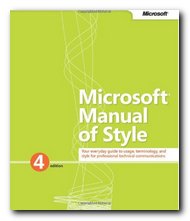 They are not at all particular to Microsoft, but aimed at producing seamlessly efficient communication. The principles include consistency of language, an empathetic attitude towards readers, precision, plain language, simplicity of sentence construction, a nod towards avoiding gender bias, and maintaining grammatical parallelism (which is very useful if you are writing instructions).

These issues are all illustrated by good and bad examples that show clearly the distinction to be made between for instance two apparently identical instructions::

Use this procedure to make any changes to your password.

The second has seven words instead of ten, less fuzz, and more clarity.

There’s a separate section on writing efficiently for the web. You should use the power of headings, sub-headings, bulleted lists, and well-chosen hyperlinks to maximise readability. There’s a specially valuable tip here. In each paragraph, put the conclusion first (what’s called the ‘inverted pyramid’ style) so that readers know if they wish to read on. People scan web pages rather than read them.

It’s not all about instructions and programs. The guidance assumes you might be using videos, blogs, and community-provided content such as wikis. It also keeps in mind that you might be writing for an international audience – but it points out that the guidelines for accommodating this are the same as for writing clearly and persuasively for English-speaking readers anyway. The maximum length of sentences should be twenty-five words.

For those people who will be writing about technology there’s a whole chapter on user interfaces – screens, menus, dialogue boxes, and toolbars – and how to write instructions that are clear and unambiguous. This is bang up to date, because to interact with contemporary devices you now need to include gesture (pich, swipe, zoom) as well as input via speech instructions and keyboard shortcuts.

More technical advice follows – on writing procedures (how to navigate through folders) how to describe cloud computing accurately, how to show code in support documentation, and fine details such as how to use filename extensions and when to use capitalization and bold.

There’s quite a lot on how to display numbers and when to use words (seven databases but a 24-hour day) how to show dates (February 12, 2012 – which is very non-standard) plus how to write captions and compile bibliographies.

On grammar and punctuation they understandably go for simplicity, clarity, and brevity. All the basic common sense rules are illustrated – but are then followed by some not-so-obvious but fascinating illustrations of indexing and list-ordering, including the order in which numerical entries will be listed. For instance 12-hour clock comes before 2-D charts.

There’s a huge list of acronyms with advice on when and when not to spell them out, and then the last half of the book is an alphabetical list of technical terms and commonly used words and phrases with illustrated explanations of good styling. They range from am/pm, through less and fewer, to ZIP codes and how to spell the plural of zero.

There are two indexes – one at the front and another at the back of the book – so it’s easy to find any detail you need to check. The latest fourth edition does its best to keep up to date with the ever expanding language of technology – app, cloud, and sync as well as terabyte (TB), petabyte (PB), and on up to yottabyte (YB). And it’s interesting to note that E-mail and Web site have now become email and website as these terms have now become part of everyday language.