The Romance of Certain Old Clothes first appeared in The Atlantic Monthly magazine for February 1868. Its initial appearance in book form was as part of the collection A Passionate Pilgrim and Other Tales published in Boston by Osgood in 1875. This is the first of James’s ghost stories, although unlike his other studies in this genre, his ghost doesn’t make an appearance until the very end of the tale. The family name of Willoughby was changed to Wingrave in later versions of the story. 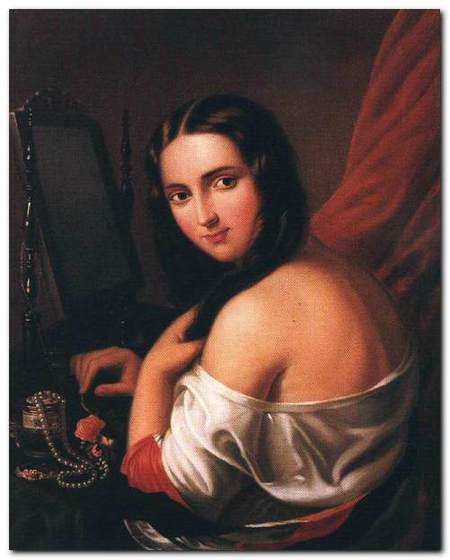 This is the one of four stories James wrote with the American Civil War as a background. The other stories are Poor Richard (1867), The Story of a Year (1865) and A Most Extraordinary Case (1868). James was eligible to serve in the war, but did not. Shortly before being enlisted he sustained a back injury which made him exempt.

The melodramatic and Grand Guignol final scene of this tale was very much in keeping with the fashion for ghost stories which became popular at the end of the nineteenth century. This was a period which gave rise to Dr Jekyll and Mr Hyde (1886) The Picture of Dorian Grey (1890) and Dracula (1897), But James was obviously mainly interested in the subconscious sexual sibling rivalry between the two sisters Viola and Perdita. In particular its vivid manifestation in the scene where Viola actually dresses up in Perdita’s wedding clothes in front of the mirror.

It is a work of James’s period of literary apprenticeship, and he would later make use of the ghost story in far more original ways in works such as Sir Edmund Orme (1891), Owen Wingrave (1892), and his most famous tale, The Turn of the Screw (1898).

Bernard Willoughby returns from Oxford University and travels in France with his college friend Arthur Lloyd, who makes a very positive impression on Bernard’s two sisters, Viola and Perdita. The two girls are in competition for Lloyd’s attention, but conceal the fact from each other and from everybody else.

When eventually Perdita reveals that Lloyd has asked to marry her and has given her a ring, Viola feels wounded but tries to be stoical about her disappointment. But after the wedding, Perdita discovers Viola secretly wearing her wedding clothes.

Lloyd and Perdita settle in Boston, Viola goes away to recover from her disappointment, and then Bernard marries.Perdita gives birth to a daughter, then dies, leaving all her clothes in a locked trunk for her daughter when she grows up.

Viola goes to live with Lloyd to look after her young niece, and Lloyd eventually marries her. Three years later she begins to covet Perdita’s collection of clothes, and she quarrels with Lloyd, who refuses to give them up. However, she gets hold of the key to the locked trunk.

When she fails to appear for dinner one night, Lloyd goes in search of her and finds her in the attic, before the open trunk. She is dead, with the marks of ‘ten hideous wounds from two vengeful ghostly hands’.