The Tree of Knowledge first appeared in the volume of short stories published under the collective title The Soft Side in 1900 – a remarkably productive year for Henry James. It was a period which saw the publication of The Great Good Place, Maud-Evelyn, Miss Gunton of Poughkeepsie, The Abasement of the Northmores, The Third Person, The Tone of Time, and the story which is widely regarded as his finest – The Beast in the Jungle. He wrote all of these (and more) in addition to working on his next novel, The Sacred Fount (1901). 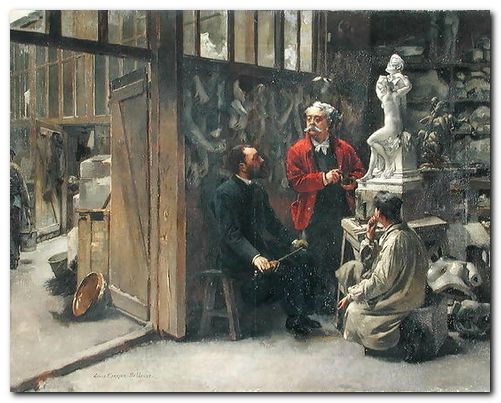 The Tree of Knowledge – critical commentary

This is one of many stories James wrote about artists and their varying degrees of success. Morgan Mallow is a hopelessly untalented sculptor who is blind to his own lack of skill but has apparently persuaded the people around him otherwise. The main point of the story is first his son’s realisation that his father is a fraud, and then the revelation that his devoted and supportive wife has been aware of his artistic failure all along.

The most noteworthy thing about the story is the lofty and droll manner in which James conveys Mallow’s lack of talent as a sculptor.

The room they sat in was adorned with sundry specimens of the Master’s genius…They were indeed of dimensions not customary in the products of the chisel and had the singularity that, if the objects and features intended to be small looked too large, the objects and features intended to be large looked too small…The creations [ …] stood about on pedestals and brackets, on tables and shelves, a little staring white population, heroic, idyllic, allegoric, mythic, symbolic, in which “scale” had so strayed and lost itself that the public square and the chimney-piece seemed to have changed places, the monumental being all diminutive and the diminutive all monumental

The Tree of Knowledge – study resources

The Tree of Knowledge – eBook formats at Gutenberg Consortia

The Tree of Knowledge – read the story on line

The Tree of Knowledge – plot summary

Part I. Peter Brench is a bachelor and a writer of sorts who is very friendly with Morgan Mallow, a hopelessly untalented sculptor who gives himself great airs and lives on his wife’s money. Brench has been a long time admirer of Mrs Mallow and is godfather to her son Lance. Brench keeps to himself his belief that Mallow lacks talent, whilst Mrs Mallow helps to support the idea that her husband is an unrecognised genius.

Part II. When Lance comes of age he announces that he is giving up studying at Cambridge in favour of going to Paris to become an artist of some kind. Brench tries to dissuade him – without success. Mallow meanwhile recieves a commission from a wealthy Canadian to carve a tombstone.

Part III. Lance eventually returns from Paris, revealing to Peter Brench that he now realises the truth about his father’s lack of talent. Brench shares his own opinions, but asks him to conceal the truth for the sake of his mother’s feelings.

Part IV. Lance returns to Paris, but his father begins to put pressure on him to produce some tangible evidence of success. When Lance feels he can longer remain silent regarding his father’s fraudulence, he reveals to Brench that his mother has confessed to him that she too all along has secretly known about her husband’s lack of talent.