Maud-Evelyn first appeared in Atlantic Monthly in April of 1900, which was a remarkably fertile period for Henry James in terms of his production of short stories. It was a year which saw the publication of The Abasement of the Northmores, Miss Gunton of Poughkeepsie, The Third Person, The Great Good Place, The Tone of Time, The Tree of Knowledge, and the story which is widely regarded as his finest – The Beast in the Jungle. James produced all of these (and more) in addition to working on his next novel, The Sacred Fount (1901). 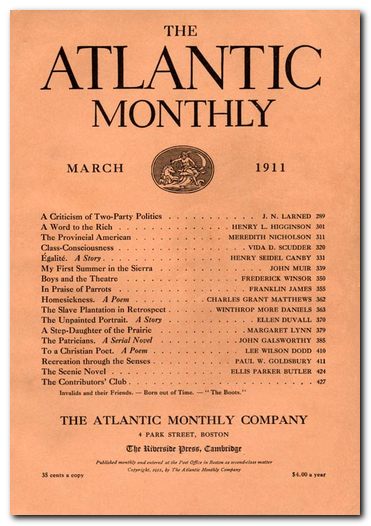 It’s difficult to offer an interpretation of the story except as a study in profound self-deception. Marmaduke progressively buys into the myth of Maud-Evelyn’s living presence – to the extent that he is prepared to invent ‘shared experiences’ in an attempt to create her fictitious ‘past’. He even seems to believe that he marries her and is widowed on her death.

What is the purpose of this willed self-deception? Lady Emma suspects that he is ingratiating himself with the Dedricks in the hope that they will ‘remember him’ in their will(s). And she’s right – because they do. But isn’t there more to it than that?

Well, Marmaduke from the start of the story protests that he will not marry. Lavinia interprets this to mean that he will not marry anybody else but her. But the truth, as it turns out, is that he doesn’t marry anyone. In fact in his own terms, he acquires a wife without actually having to get married, and then becomes a widower, without ever having had a wife.

Is this perhaps another version of the ‘fear of marriage’ theme that James turned to again and again in stories composed during this period of his career? If Marmaduke gets married without acquiring a wife, Lavinia inherits his fortune without marrying him, though the price she pays for doing so is to be forced to wait until she is an old maid.

Another way of looking at the story is as a variation of the ghost story, which James explored on a number of occasions (Sir Edmund Orme, The Friends of the Friends, The Turn of the Screw, Owen Wingrave). Maud-Evelyn is dead, yet she is in one sense the central focus of the story. Her parents spend their time keeping the myth of her existence alive. And Marmaduke is so entangled in the fiction that he even imagines he marries and is widowed by this dead person.

Somehow, the themes of the ghost story, the fear of marriage, and a strange sequence of inheritance seem to converge uneasily yet ultimately to a satisfactory conclusion in this story.

Maud-Evelyn – read the story on line

An obscure and elderly woman has recently inherited wealth to the surprise of an assembled group. But one of them, Lady Emma, knows the back story to the unexpected inheritance. It is her first person account of events that forms the narrative.

Lady Emma recounts her relationship with two younger (and poorer) friends, Marmaduke and Lavinia. In the past Marmaduke has paid court to Lavinia, who has not taken up his offer of marriage and now regrets it. He says he will not marry anyone else, and they remain friends.

On holiday in Switzerland, Marmaduke meets Mr and Mrs Dedricks, who keep alive the memory of their dead daughter, Maud-Evelyn, as if she were a living presence. They cultivate Marmaduke, who reciprocates their enthusiasms.

Lady Emma is sceptical about Marmaduke’s motives, thinking he might be a fortune hunter. When she discusses the issue with Lavinia she is surprised to find that Lavinia approves of Marmaduke’s support for the fiction that Maud-Evelyn is still alive.

As Marmaduke grows older he becomes like a son to the elderly Dedricks, and he starts to believe that he actually knew Maud-Evelyn and has shared life experiences with her. Lavinia’s mother dies, leaving her ‘faded’ and ‘almost old’, but she continues to rationalise Marmaduke’s behaviour in supporting the Maud-Evelyn myth.

Marmaduke then announces that he has become ‘engaged’ to Maud-Evelyn. He has bought wedding presents for her, and a bridal suite is established at the Dedricks’ home in Westbourne Terrace.