The Captain’s Death Bed (1950) is the third volume of collected reviews and essays to be published by Leonard Woolf at the Hogarth Press after the death of his wife Virginia Woolf in 1941. They represent her work as a journalist, book reviewer, lecturer, and essayist over the last twenty years of her life – a period which saw the production of her most famous experimental novels – Mrs Dalloway, To the Lighthouse, and The Waves. 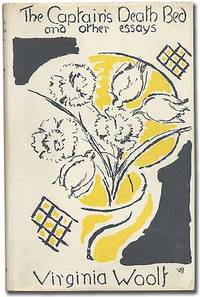 In his introductory editor’s note to this collection, Leonard Woolf suggests that these essays and reviews would have been rewritten and polished for republication by Virginia Woolf had she lived – as she had had been in the habit of doing with all of her work. This may well be true, but the advantage for the reader is that the essays are in the condition in which they were first released for publication, and we can trace the development of her style as the years progress. Not that there was a great deal of development: she was writing fluently and imaginatively from almost her earliest work. These pieces span the years 1924 to 1939.

As in many of her essays and reviews, she offers interesting reflections on keeping diaries, something she did herself to great effect. For instance, Parson Woodforde is a completely ordinary man, to whom nothing of any importance happens, but this gives her the launching pad for one of her favourite literary topics – the rhythms and content of everyday life in all its mundanity. This was a theme she was to explore again and again in her fiction – the fact that our lives are not composed of high dramas and spectacular conflicts, but of fleeting thoughts, shifts of mood, evanescent memories, and fragments of observation – what she called ‘life itself’.

In one sense this is something of a naturalistic approach when applied to the creation of fiction – but Woolf combines it with both a lyrical, quasi-poetical literary style and a philosophic meta-critique of the phenomena she is describing. If Mr Smith thinks of his wife whilst making his commute to the office, she generalises the nature of memory and the shifting significance of individuals in each other’s lives.

Similarly, the captain of the title piece is a seafarer (the novel-writing Captain Marryat, no less) whose works capture the everyday facts of life in a way that no later novelist can:

because no living writer can bring back the ordinary day. He sees it through a glass, sentimentally, romantically; it is either too pretty or too brutal; it lacks ordinariness.

She presents sympathetic portraits of writers as diverse as Goldsmith, Ruskin, and Turgenev, and even some whom she knew personally such as Thomas Hardy and Joseph Conrad, both of whom were friends of her father Sir Leslie Stephen.

The most famous piece in the collection is the much quoted and reprinted lecture of 1924 on character in fiction, entitled Mr Bennett and Mrs Brown. This is a variation on a subject she had treated before, in her 1920 short story An Unwritten Novel – which describes the attempt of a narrator to explain the character of someone unknown occupying the same carriage on a railway journey.

In this piece she takes issue with Arnold Bennett, John Galsworthy, and H.G. Wells as novelists who had failed to notice her famous claim that ‘in or about December, 1910, human character changed’. She suggests that Wells would have put Mrs Brown in one of his impossible Utopias; Galsworthy would place her in an economic analysis of her class; and Bennett would offer a sociological sketch of her house and its surroundings. In other words none of them would capture the essence of her character as a credible human being.

But she asks herself what have later, Georgian writers to offer as alternatives? She identifies the work of Forster, Lawrence, Eliot, and Joyce as brave attempts at establishing new contracts between author and reader, but urges patience, giving them time to develop. We now know that they did develop – none more so than the one great writer she modestly leaves out of the list – which is herself.

In an article on book reviewing first published as a Hogarth Press pamphlet in 1939 she spells out the history and the condition of book reviewing as distinct from serious literary criticism. She suggests it is a difficult and an often-abused system, and so proposes an alternative whereby authors pay a certified reviewer a consultancy fee for an advisory interview conducted in private. Leonard Woolf, as her editor, adds a note which sums up In three pages the whole business and the economics of publishing book reviews.

There are also some delightful surprises – essays on what was then modern technology – for instance, the cinema and flying. She views the early movie classics and immediately perceives that cinema has at its disposal a ‘secret language’ of symbols and metaphors which make laboured explanations of what is happening on screen unnecessary.

For a strange thing has happened – while all the other arts were born naked, this, the youngest, has been born fully clothed. It can say everything before it has anything to say.

The most amazing piece is her account of Flying Over London in which the novelties and incongruities of solid human beings hurtling through the air are explored in a series of aerial metaphors and shifts in point of view. Given the danger of this enterprise, it is not surprising that before long images of death and extinction are mingled with impressions of floating through clouds and witnessing City traffic congestion like lines of crawling insects. But the real beauty of the essay comes from the fact that she never left the ground, and has not flown at all. It is a work of fancy and utterly convincing imagination.

The Captain’s Death Bed – Amazon US

1950 – The Captain’s Death Bed and Other Essays